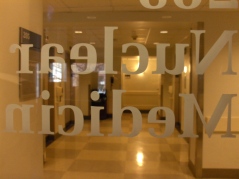 As mentioned in my first post (The World Still Out There), this blog grew out of  succinct administrative updates I sent out to a cyber-community (under the umbrella of Lotsa Helping Hands) of family and friends eager to do whatever they could to help us after my husband’s diagnosis.   The posts gradually grew more descriptive (if not outlandishly long-winded), and I found writing them vastly therapeutic.

“The Waiting Room” was one of the first posts that followed my husband’s death:

I have used the phrase “I’ve got good news and bad news” for comedic purposes, but I never used the words “I’ve got bad news” until the Monday Jim was diagnosed, when I quivered into a friend’s voice mail: “It’s Auntie Steph. I’m with Jim at the Lahey Clinic and we have really bad news.”

I couldn’t break the news to my family, but for calling my younger brother the next day and saying his name in a way that made him ask if he should pull over the car.

When I asked if he was driving, his drawn-out, somehow multi-syllabic “yes” made it clear the question had been delivered as if I had asked, “Are you sitting down?”

Jim never used the phrase “I’ve got bad news” with me or our children.

Perhaps the closest he came was the night of his  diagnosis, when we both independently tried to make arrangements with our sons’ friends to get our sons home–without panicking them–as soon as possible.

Of course, there is probably no better way to ensure panic will ensue than to alert someone to the possibility of panic.  (My elder daughter later apprised me I also need to eliminate from my repertoire the opening line, “I don’t want to freak you out, but . . .”)

Only after his death did I realize what it was about Jim that kept him from ever having told us “I have bad news” about himself.

I began to understand this a few weeks afterwards, when I became increasingly irritated at the way someone else’s patient was prattling in another doctor’s waiting room.

The woman was morbidly obese and in her sixties.  When she checked into the orthopedist’s office she launched a loud, HIPAA-to-the-winds conversation which she made impossible not to overhear.

After checking in with the receptionist and being told she could have a seat, she continued gratuitously to discuss her past cancer treatments.  No one had asked her about this: all the receptionist needed was her name.  But she announced she was doing quite well, although she mentioned being uninterested in hewing to portions of her internist’s advice. (Her internist, whose name she broadcast to the room, happened to be ours.)

Jim probably had had countless patients like this one.  In fact, our internist may well have inherited this very patient from Jim’s primary care roster.

I sat in a seat only a few feet away, waiting for one of my daughters.

The woman made her way to a seat in the waiting room.  After a few minutes, a nurse opened the door to the examining rooms and called the woman’s first name.  She looked up.

The nurse introduced herself by name, then directed to the woman the rote pleasantry, “How are you?”

“I’m a survivor,” the woman announced theatrically, in place of a “Fine, how are you?”  She made the declaration as if the fact of surviving cancer evidenced some personal virtue on her part.

It seemed somehow inappropriately self-congratulatory to me, admittedly still awash in the unfairness of my husband’s affliction.  “Survivors,” Mihaly Csikszentmihalyi wrote in Flow, occupy a select and worthy position: “The ability to take misfortune and make something good come of it is a very rare gift.  Those who possess it are called ‘survivors,’ and are said to have ‘resilience,’ or ‘courage.’  Whatever we call them, it is generally understood that they are exceptional people who have overcome great hardships, and have surmounted obstacles that would daunt most men and women.”  Implicitly, I think, “survivors” in this sense do not anoint themselves as such.

Although he did not survive his cancer, Jim was such a man.

Jim, however, would not have given this interlude a second thought.  Analyzing my own irritation and resentment in that waiting room gave me yet another window into Jim, and another way in which to aspire to grow up to be like him.

I realized Jim never would have made the fundamental assumptions that the woman in the waiting room seemed to be making (or at least that I, through the prism of my own grief, was hearing): that no one else in the room was likely to have experienced problems as substantial as hers, and that survival somehow is earned.

To the contrary, just as Jim had told me (when in pain so profound it required his first emergency hospitalization and I asked him to assign it a number so I would know what to call ahead to notify the oncologist to streamline the admission) that other’s pain “could always be worse”; his compassion made him assume others had it worse than he.

His default position, even when he knew he was dying—indeed, possibly especially then–was to assume his own good fortune.  It would not have crossed his mind to ponder how long whatever he was thankful for might last, or fear that it would be taken away.

He never complained about his illness.  It was more than just inherent optimism, but a state of grace.

I would look around a radiologist’s waiting room and see much older patients, and assume many of them had made choices which contributed to their condition.

At least once, Jim read my inner thoughts as I made this kind of internal survey of a particularly antique crowd.

He leaned down and whispered to me, “Other people are allowed to get older.”

Where I railed against losing my young husband; Jim recalled patients younger than he, and considered himself lucky to have lived to see all of his children become teenagers, and three of them graduate from high school and become young adults.

I saw overwhelming, endless days ahead dealing with the emotional fallout of his death for our children and, selfishly, for me; and he saw something everyone has to endure, and from which those left behind have to move on.

For any ordinary mortal facing his own death—and most certainly had our roles been reversed—I imagine there would be not just self-pity, but a symphony of self.

So far was Jim from viewing himself as the center of all things—so opposite was his life perspective than that of the narcissist—that he reduced the Most Momentous Experience a human can endure, dying from a terrible and inescapable disease process, into “one of those things” everyone has to deal with.

Being a pancreatic cancer patient, Jim said to his colleagues early on, easily could become a sad and uncompensated full-time job.  He made it into something else entirely.

In an indelible moment during all of the endless hours we spent entrapped within the health care system, I am sure my voice was contorted with grief for a future without him there with us.

Imperturbably, as always, despite his increasing and by then ever-present pain, he told me, “You’ll get through it.  Lots of people do.”

There is no rational sense in which it is easier to be the dying spouse than it is to be the surviving one: when it was suggested to me that my role was the more difficult one, I responded that I never had to say goodbye to my children.

But Jim truly believed my role was harder than his; he knew his suffering, his time, and therefore his very capacity to worry about us were finite, and that my capacity for worry is infinite.

There simply was no self-pity in Jim.  He told me it would be harder for me in precisely this way: he would be gone, and I would have to go on, without him, for whatever came our way next.

Jim’s concerns were for others at every step of the way, and he felt that his was a shared experience—of everyone’s ultimate shared fate–to be openly discussed, and assumed that others had it worse.

Jim would not use the words “I have bad news” about himself because, no matter what he had to say, and even during the months he had lost so much, he never assumed he was the unluckiest man in the room.

In fact, as long as he had the capacity to form thoughts, and despite everything he had been through; even when he came home to die, he truly never considered himself the unluckiest person in the room.

5 thoughts on “The Waiting Room”