During our last family vacation, as we met new friends who never otherwise would have appeared in our lives, my book pile  included John Irving’s Last Night in Twisted River. One character literally fell from the sky into another’s life: “We don’t always have a choice how we get to know one another. Sometimes, people fall into our lives clearly – as if out of the sky, or as if there were a direct flight from Heaven to Earth – the same sudden way we lose people, who once seemed they would always be part of our lives.”

Twenty-two years ago, fresh out of years of training—two weeks before our first son was born and three weeks before tackling a round of his Board Exams–my husband joined a newly-formed internal medicine practice with a partner who had been recruited only a few months earlier.  At Jim’s Closing Ceremonies, that partner would describe the union as more of an “arranged marriage” than the customary method by which a  more experienced physician brings a new one into a practice.

That was how Doctor Bob fell into our lives, as did his wife, who became our children’s pediatrician.  Then, in quick succession, their first son was followed by seven more infants between our families; we both had two sons, followed by two daughters.

Bob was quite the trend-setter.

In the years before Jim’s diagnosis, when I was afraid of flying, one of my many idiosyncratic thoughts was to be reassured if a plane’s captain announced that he was “Captain Bob.”  (I know Captain Joe will read this; I also felt better with Captains Joe.)

We had a Captain Bob for Jim’s care.

From the moment he learned of Jim’s diagnosis, Bob took care of Jim.  He checked in on him every day.  He picked us up from one hospital, as Jim was still groggy from the anesthesia under which a port had been implanted, and whisked us to a neighboring state for a consultation, where I got to witness the powerhouse intellectual medical interplay among the three physicians as they weighed treatment options.

I know the two of them also were expending precious time to keep an eye out on me, the non-patient, as I caved under the weight of Jim’s diagnosis and the barrage of technical information that attended it.

Soon after Jim’s chemotherapy treatments were abandoned, Bob took him out on a boat on the water they both love as I ferried another child to school by less scenic means.

Jim spent what he knew would be his last birthday, December 10th, climbing a mountain with Bob, who himself was recovering from surgery.  Of course Jim brought his camera, and clicked photographs along the way. 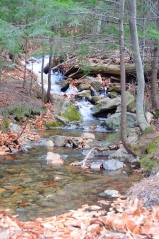 On Jim’s last birthday, a smattering of ice already appeared in the water during his mountain hike with Bob. Another favorite trail began just around the corner from our good friend Gary’s home.
(c) 2010 Jim Glennon

They likely made much of the climb quietly, thoughtfully; both are the kind of men and friends with whom one would need “neither to weigh thoughts,/Nor measure words.”

At the top of the mountain, Bob repeated his vow to be with Jim until the end, and he was.

He also was there at every hospital admission.  At the last, late on a Sunday night, the three of us were in a darkened room waiting for pain medication to be infused.  I was on one side of Jim’s bed and Bob was on the other, just as we would be when Jim died.

Both Bob and Jim have only sisters, biologically speaking, though physically they resembled each other more than my own children look alike.  A nurse came in and looked at the two of them.

“You’re not brothers,” she said to Bob with a smile, because it went without saying that they must be.

It was Bob who kept me–to a degree–from going Medieval on the lone force discouraging us from taking Jim home from the hospital, as Jim wanted, because of the level of twenty-four-hour-a-day medical care he would need.  No ordinary human could have pulled that off.  Bob moved in with us so Jim could have his wish.   He set up a pharmacy and ICU in our dining room and took care of us all from his spectacularly uncomfortable “special doctor’s stool.”

“There will be bumps,” Bob told me that last day in the hospital; until that point, since the onset of Jim’s symptoms, there had been seemingly endless, often terrifying medical complications.  But when we got him home there were not.  For the first time, under his friend’s care at home, Jim no longer suffered.

Of course the relationship was not about its end; they learned the art of medicine together; visited each other’s newborns; laughed over meals; inveigled some amazing adventures, including a trip to California with both our newborn girls; gently teased us spouses about our domestic failures (especially mine, which could fill their own blog); shared a love of the outdoors; and comfortably could be in contemplative silence together.  But the intensity of Jim’s last months revealed the best in nearly everyone who had fallen into our lives.  From his friend Bob, Jim received an unparalleled gift of compassion.

Happy Birthday, Bob.  Jim would want that for you.

In her spare time, Stephanie works full-time, and then some, as an attorney. She has published articles and delivered talks in arcane fields like forensic evidentiary issues, jury instructions, and expert scientific witness preparation. She also is an adjunct professor at a law school on the banks of the Charles and loves that dirty water, as she will always think of Boston as her home. You are welcome to take a look at her Facebook author page, or follow @SMartinGlennon on Twitter. All content on this blog, unless otherwise attributed, is (c) 2012-2020 by Stephanie M. Glennon and should not be reproduced (in any form other than re-blogging in accordance with Wordpress protocol and the numerous other wee buttons at the bottom of each post) without the express permission of the domain holder.
View all posts by Stephanie →
This entry was posted in Love and Loss and tagged brothers, friendship, hospital, mountain, Twisted River, vow. Bookmark the permalink.