I began our continuing travelogue with a reference to my fruitless attempt to trick time.   We accompanied daylight through multiple time zones and ended up thirteen hours ahead of ourselves, so that the anniversary of Jim’s death had yet to take place as we wandered the streets and subways of Kyoto on March 22.  We slumbered in Japan as the church bells sounded across the street from our New Hampshire home to mark a year from his final hours there.

Years before Jim was diagnosed, I was forever moved by the story of a boy who lost his father and grew up to be a physicist, wanting only to build a time machine so he could see his father again.

When he was ten, Ronald Mallett’s father died from a sudden, massive heart attack.  Soon afterwards, young Ronald determined he would build a time machine, knowing he would need to master wildly advanced mathematics and theoretical physics—all so he could go back to the 1950s and warn his father to make lifestyle changes which might abate the heart disease that killed him.   His life was governed by imagining himself as an adult, travelling back in time and saying to his father: “And I’m here to tell you that you are going to die, and you’re going to die in the near future. And that’s why you’re not in these pictures. These are pictures of your family without you. And the reason that you’re not is because of the fact that you smoke two packs of cigarettes a day, you don’t take care of yourself, you’ve got a very weak heart. If you change, you will live. And that’s what I’ve come here to tell you.”

Mallett accomplished many of his goals.  He became a physicist.  After decades of study and research, he produced a prototype of a time machine.  After Mallett delivered a talk about his findings, a physicist he described as a “a contemporary of Einstein’s and a physics giant, who had helped pioneer a new approach to quantum mechanics,” said, in front of the entire audience, “I don’t know whether you’ll ever see your father again, but he would have been proud of you.”

Mallett considered this a validation of his entire life’s work.  At the same time, he had an epiphany: according to his own equations, “his time machine would never work, at least not the way he wanted it to” because it never could go back beyond “the moment the machine was first switched on.”

I remember going to find Jim on a Saturday afternoon, to tell him about this story, which I heard on the radio during the now yearned-for ordinary family days of catching up on household tasks–in this instance, folding laundry while Jim tended to his preferred outside chores.  Echoing in my mind were the words with which the narrator closed this story: “without [Mallett] ever really noticing, the plan he made as a boy got replaced with a more adult plan, one based on an adult’s understanding of what was actually possible. So by the time he found out he’d never see his father again, he didn’t need to.”

For our family, even an extant time machine could have accomplished nothing: my husband had no known risk factors, and had not engaged in any activity or had any exposure that might have resulted in (and therefore made it possible to deflect) his bolt-out-of-the-blue diagnosis with the rare, stealthy cancer that is most likely quickly to prove fatal.

Probably not even routine full-body MRI screenings would have caught Jim’s cancer before it had metastasized.   (And who, I have thought many times since his diagnosis, would want to live under the constant hovering presence of an effort to seek out evidence of low-probability devastating news?)

That certainly was not part of Jim’s adaptive approach to life.  Equally important is the corollary: not even the certain knowledge of what would  come at this young age would have changed how Jim lived his life.

So perhaps we should skip to the epiphany, for my own children, lest they not already know: you make your father so proud, just as surely as he remains your father forever.   There is no past tense to that.

He is just as proud of the daughter who dove in and started this spring term despite the weight of having seen him die on the first day of her previous spring term as he is of the children whose schedules could be adapted to permit them to launch this adventure on another continent. 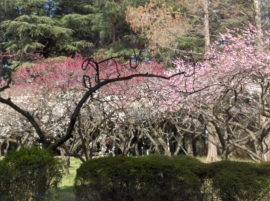 That adventure continued with a long walk along the Kamo River, to Kyoto’s Botanical Garden, which was only a few days away from the glory of cherry blossom season.

We began in a towering greenhouse architecturally reminiscent of a roller coaster.  (Everyday life remains replete with metaphors.)

In the entranceway way were two enormous corpse flowers encased in cylindrical glass.  (Simpsons fans may have a related, indelible cartoon sequence embedded in their minds.)

My daughter’s camera lens beaded with moisture as she snapped the kind of close-up photographs Jim would have taken on the other side of the world, as we wandered around the paths where our children’s proud father would have lingered as his keen eyes appraised lemon-rimmed scarlet flowers arrayed like birds’ heads; leopard-speckled orchids; and plant leaves which looked as if they had been hand-painted with magenta watercolors on one side and emerald on the other.

In her spare time, Stephanie works full-time, and then some, as an attorney. She has published articles and delivered talks in arcane fields like forensic evidentiary issues, jury instructions, and expert scientific witness preparation. She also is an adjunct professor at a law school on the banks of the Charles and loves that dirty water, as she will always think of Boston as her home. You are welcome to take a look at her Facebook author page, or follow @SMartinGlennon on Twitter. All content on this blog, unless otherwise attributed, is (c) 2012-2020 by Stephanie M. Glennon and should not be reproduced (in any form other than re-blogging in accordance with Wordpress protocol and the numerous other wee buttons at the bottom of each post) without the express permission of the domain holder.
View all posts by Stephanie →
This entry was posted in Back in the Real World, Love and Loss and tagged corpse flower, Kyoto Botanical garden, orchids, photographs, physics, Ronald Mallett, The Simpsons, This American Life, time travel, Vileplume. Bookmark the permalink.

3 Responses to Skipping to the Epiphany: Time Travel and Hothouse Flowers (Kyoto: Part 3)