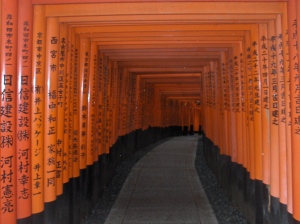 I promised to continue my travelogue, in which our adventures resumed in torrential rain.  We were thoroughly soaked by the time we reached Kinkakuji (金閣寺), which became a Zen temple in 1408.

The lavish Golden Temple originally had been one component of a shogun’s retirement compound, and was rebuilt most recently in 1950 after being “set on fire by a fanatic monk.” 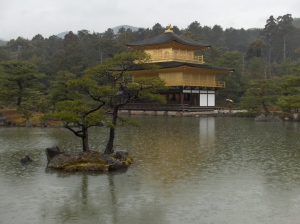 We trudged on through the wet grounds and paused at a stand to select a charm as a gift.  When we did, the woman behind the table brightly smiled at my younger son, who (it being T-shirt weather, dagnabbit) was soaked to the skin from the pouring rain.

So it was a round of umbrellas for us less-prepared travelers.

We continued on towards a place a friend of my daughter’s had told her we should be sure to visit.  It was a wonder: Fushimi Inari Taishi (伏見稲荷大社), a Shinto shrine with trails into the forest on Mount Inari. 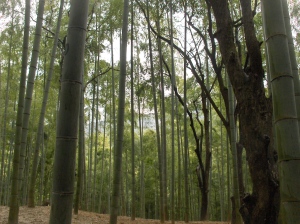 Inari is the Shinto god of rice and sake, to whom the Temple was dedicated in the eighth century.  Foxes, standing guard at many of the torii shrines, are said to be Inari’s messengers.

It is sometimes known as the Shrine of a Thousand Torii Gates, but has thousands upon thousands of bright orange, pi-shaped gates tipped with black.

I did not know at the time that the literal meaning of a torii gate is “where the birds rest”; my husband Jim was a devoted caretaker of birds, and I frequently see them as among my messengers from him.

These gates are arranged into paths.  Others are set one inside the other, in descending sizes, like an endlessly self-referential Escher sketch (or Stephen Colbert’s portrait). 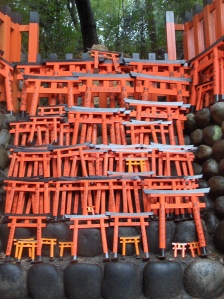 We wandered through the paths of Pi for hours, climbing high on Mount Inari to look down upon a city that remained shrouded with rainclouds.

It is more common today to wish for business success than to weigh in for rice and sake at this incredible place, but we were told that one can wish for anything by way of those vermilion gates.

I used my silver yen to purchase a miniature gate for each of my children, on which I will inscribe my infinite wishes for them.

In her spare time, Stephanie works full-time, and then some, as an attorney. She has published articles and delivered talks in arcane fields like forensic evidentiary issues, jury instructions, and expert scientific witness preparation. She also is an adjunct professor at a law school on the banks of the Charles and loves that dirty water, as she will always think of Boston as her home. You are welcome to take a look at her Facebook author page, or follow @SMartinGlennon on Twitter. All content on this blog, unless otherwise attributed, is (c) 2012-2020 by Stephanie M. Glennon and should not be reproduced (in any form other than re-blogging in accordance with Wordpress protocol and the numerous other wee buttons at the bottom of each post) without the express permission of the domain holder.
View all posts by Stephanie →
This entry was posted in Metaphorical Mathematics and tagged Escher, foxs, Golden Temple, Inari Taishi, Kinkakuji, Kyoto, Mount Inari, rice, sake, Shinto, shrine, Stephen Colbert, torii gate, travelogue, Zen. Bookmark the permalink.

1 Response to A Golden Temple and Infinite Pi (Kyoto: Part 5)