I attended an extraordinary memorial service today, at Tufts School of Medicine, for the families of people who have donated their bodies for medical study.

I know from my husband’s own first year as a medical student at Tufts that learning human anatomy is among the most riveting and reverential things they ever will do.

I did not know of this annual ceremony, though, in which the students grace these families with music,  artwork, and poetry.   After the service, my husband’s team of students presented me with flowers. 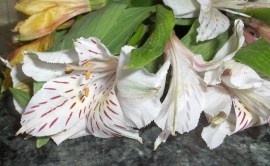 We also were given a treasured opportunity to speak to the students who have learned so much from the people we love.

A divet and a button: in addition to his youth and outwardly great health and condition, these were the two things medical students noticed when they first saw my husband’s body.

They knew from the implanted port that left a circular, button-like protrusion above his heart, like a penny pressed upward–something I always feared would hurt him as I rested my head there, though he repeatedly assured me it did not–that he likely had chemotherapy drugs infused into him.

And they knew from the pronounced impression on his ring finger that he was a husband, that he had a family and was loved.

When the students mentioned the ring divet, I showed them the wedding band that made it, and hangs on a chain around my neck.

It turned out that in January of this year, shortly before I wrote about my husband’s wedding ring–which I could not bear to ask him to take off for me when he still had any chance of regaining consciousness–one of the medical students had written on her own blog: “I am so thankful to the man who donated his body to science to allow me to learn. . . . [H]e has a depression where his wedding band was and it really broke my heart because he is somewhat young and . . . looks stunningly alive and healthy.  So this post is dedicated to him.”

First-year medical students learning human anatomy know only the first names of their laboratory donors.  They can approximate their ages by observation, and of course there comes a point during the year when they learn a great deal about their causes of death.

The most extraordinary thing for me about these intelligent, thoughtful young students was that they are the only ones who have have seen The Beast: because my husband never became a surgical candidate, no one had ever seen, let alone closely examined, the pancreatic tumor that took his life.

Its broad outline had moved across scanned images which I had never seen except at a distance and through a veil of tears.  The shadows of its metastases had appeared on his liver images, to trained radiologists’ eyes.  But these were the first people who had seen it, and examined it, and learned from it.  It truly made me feel better to meet them and talk to them and see in their eyes and hear in their voices the interest and wonder and compassion which are so enormously important in making a good physician.

There came a moment in this wonderful ceremony when one of the Anatomy professors said that the course is not complete until the students have held this memorial service to honor the donors and to bring together the family of medical students and the donors’ own families.

He asked if anyone would like to speak about a family member.   No one spoke, so–not being a wallflower–I raised my hand.  What I wanted the medical students to know was this: their reverence towards learning the art of anatomy through the bodies of those we love is a gift to us.

And I wanted the other families to know, lest they not already be familiar with how anatomy is taught, that the wonder–the near-spiritual amazement–my own husband experienced as a first-year medical student with his donor, Max, was the most profound learning experience he had.  It stayed with him throughout his life and medical career.

One of the students put it beautifully: whenever she hears any anatomical term, she will now have a picture in her mind that she owes to her donor: that one generous person’s heart, or furled nerve, or pancreas.  Those images will guide her throughout her medical career.

My husband will be the first patient in what I believe, from meeting these students, will be meaningful careers of service for both them and all the living patients to come.

I’m certain Jim would have been glad to be in these hopeful hands, helping teach them how to heal.

I am thankful to them for choosing this path, and treating him–and me–so well. 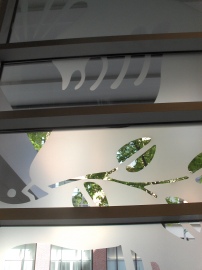 27 thoughts on “A Divet and a Button”