I have been transfixed for several days by the immensity of flowers which have followed one of the driest winters.  No sepia is to be seen among bushes brimming with dinner plate-sized flora in vivid red, pink, magenta, yellow and lilac.

Today I interrupted another parade of drudgery and wandered in the rain.  Somehow I did not snap a single fuzzy photograph (unlike my husband, the exquisite nature photographer, ordinarily I bat around .500 on a very good day).

Some of the flowers seem to be weeping immense tears.  Others look as if they are clenching their petals against the onslaught.  A blue-violet iris seems to be using its outer  petals (the falls) to enfold its center, like a pregnant woman protectively holding her abdomen.

Despite the deluge, some leaves seem to be no more weighted by the pearl-sized drops than they are by morning dew.  Most of the petals are a captivating pointillist filigree that seems like it would be cool velvet to the touch.

And now that I look at these pictures without the intervening camera lens, I see within the curling petals, swirled and settled by streaming rain, images I certainly didn’t see before and will not soon “unsee.”

Look above.  Do you see in the center the face of a tiny winged creature or a canny pirate with a headscarf tied to its left, where its gaze warily wanders?  Or perhaps the face of a 1920s flapper, with a scarf and slightly-upturned, flower-bedecked hat with a soft curl of bobbed hair beneath it?  (One of my sons sees the head and beak of a chick turned to the right.) 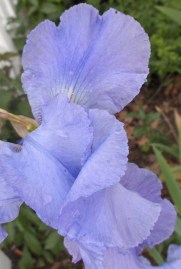 I’d like to share one more and one perhaps less optimistic poem for a rainy spring day.  John Clare wrote:

And in the even’s pearly dew

And in the heaven’s eternal blue.

How fresh, oh Lord, how sweet and clean
Are thy returns! even as the flowers in spring;
To which, besides their own demean,
The late-past frosts tributes of pleasure bring.
Grief melts away
Like snow in May,
As if there were no such cold thing.
Who would have thought my shriveled heart
Could have recovered greenness? It was gone
Quite underground; as flowers depart
To see their mother-root, when they have blown,
Where they together
All the hard weather,
Dead to the world, keep house unknown. 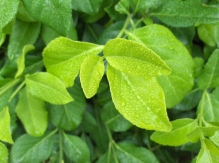 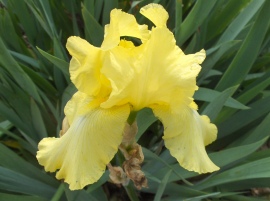 In her spare time, Stephanie works full-time, and then some, as an attorney. She has published articles and delivered talks in arcane fields like forensic evidentiary issues, jury instructions, and expert scientific witness preparation. She also is an adjunct professor at a law school on the banks of the Charles and loves that dirty water, as she will always think of Boston as her home. You are welcome to take a look at her Facebook author page, or follow @SMartinGlennon on Twitter and @schnitzelpond on Instagram. Bonus points for anyone who understands the Instagram handle. All content on this blog, unless otherwise attributed, is (c) 2012-2021 by Stephanie M. Glennon and should not be reproduced (in any form other than re-blogging in accordance with the wee Wordpress buttons at the bottom of each post) without the express permission of the domain holder.
View all posts by Stephanie →
This entry was posted in Love and Loss and tagged batting .500, flowers, George Herbert, John Clare, photography, poem, The Flower. Bookmark the permalink.