These lyrics make me shamelessly wistful for days with my young children, listening to Elmopalooza (I kid you not) on what was, back in the day, known as a cassette player.

Twice I have heard Shawn Colvin sing in person.  Once she opened an acoustic  set on a rainy night in Portsmouth, New Hampshire.   My husband Jim had just rushed into town from a typically long day at work.  I was soaked from waiting outside the theater in the rain in a bright pink floral print sundress that could not have been less suited to the weather.  It was another triumph of hope over reality, though the hope then was merely for a pleasant late spring night.

It was a rare evening out without our children, and Jim and I held hands and settled into our seats.  The skirt’s rain-soaked cotton squished as I shifted (Laura Ashley was never one for skimping on yardage).  It was then we realized why the seats were so affordable:  we were wedged behind a wide support pillar.

But the music was gorgeous.

John Hiatt played next, and that was the first time we heard My Baby Blue.

Instantly, I loved this song.

Especially now, years later, I very rarely hear it played on the radio.

The dam has not yet burst for me today.  Then again, the sun is still up.  Especially  when I think of my older children away at school–one of them at the very place my husband and I met and this family life began (and another at the college Jim decided not to attend after a weekend visit  with a particularly less-than-studious group of hard-drinking young men)–I simply cannot believe the children with whom I listened to Elmopalooza are young adults any more than I can believe Jim isn’t here with us, or stop calling out to him.  And as I was thinking of my not-so-little ones now off at school, studying subjects far beyond my understanding, those unmistakable introductory steel guitar chords registered on me.  I turned up the volume.

Minutes turn to days
Years just melt away
In the park at dawn
Just a flower on . . . .

If I could time it right
I’d be with you tonight
Out among the stars
Is that where you are?

Jim and I regularly traveled to John Hiatt performances in at least three states.  It was rare that we did not hear him sing when he was in New England–although we failed to use our tickets to the Hampton Beach Casino the night our first son finally reluctantly (and with considerable medical intervention) made his appearance.   It was by no means uncommon for us to hear  John Hiatt play in person.

I did, weeks after Jim died, on another drenching night in Portsmouth.  This time it was my somber forest green dress (both our flora and my inclination towards bright colors perished when Jim was no longer here to care for us) soaked through by a storm so blustery that the people behind the curtain waited forty-five minutes before determining it would be safe to send Ms. Colvin out onto the stage at Prescott Park.

She had a chance to sing only four songs before lightning made further outdoor musical entertainment more dangerous than seemed worthwhile.

So it came to be that Shawn Colvin, John Hiatt’s acoustic companion on that long ago night among so many nights when Jim was mine, decided to sing these words before the microphones went silent and the lights went out:

So far I have found four telescopes among things Jim left behind–one for each child.  I’m not sure we need them to think of him tripping the moonbeam light fantastic or out among the stars. 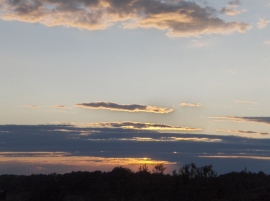 3 thoughts on “My Baby Blue”