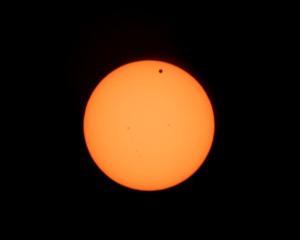 I’ve touched upon deep greens and blues, swaths of sepia, my proclivity toward seeing things in black and white, and some of the unintended side-effects of my fondness for bright red.

Today, thanks to a gift from one of my daughters, I am clad in the brightest of orange–an extremely high-visibility school color.

I have concluded it is nearly impossible to be dour for long while wearing neon orange. 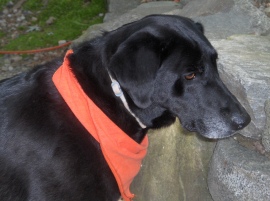 There is something inherently lighthearted about orange.

When one of my sons was in second grade, a classmate who was too-clever-by-half grew tired of a limerick writing exercise (I know, I know: who possibly could become jaded about the limerick form at so tender an age?).   One team would pass off a first line to the next as the limerick progressed.

And so young John, on behalf of my son Sam’s team, provided the next group with the opening line, “My favorite color is orange.”

Well, that showed Mrs. Prien (whose daughter, coincidentally, shared my daughter’s orange-and-black undergraduate institution, and thus arguably might have seen that one coming).

The most sublime and indelible orange I ever will see was that of the enormous perigee moon that hung low on the horizon the last night my husband Jim was able to step outside.  He had come home in an ambulance, but he stood and walked outside on his own to see this magnificent moon, of a slightly muted hue that called to mind James’ Giant Peach.

We stood in a line, our family and our best friends in this world and whatever world comes next, and my husband leaned on our sons and our friend Randy for support when he needed it.

He soaked it in quietly.

My husband loved the heavens.  He would track ordinary and extraordinary astronomical events, preparing equipment so that he and our children and their friends could see the latter.  When he went on Boy Scout trips as a Troop Leader he would sleep under and point out the stars and constellations.  His knowledge of the universe was as encyclopedic as was his knowledge about music.

A few nights ago, his lifelong friend Captain Joe had a rainy, overcast layover in Oregon.  But it unexpectedly cleared–perhaps with a little bit of help from his friend.

And Joe was able to capture it for the rest of us, a twice-in-this-lifetime moment of Venus skipping over the Sun’s surface, like the navel on a sun-kissed Florida orange. 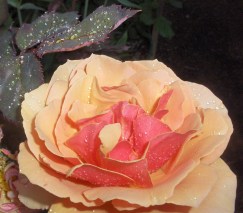 In her spare time, Stephanie works full-time, and then some, as an attorney. She has published articles and delivered talks in arcane fields like forensic evidentiary issues, jury instructions, and expert scientific witness preparation. She also is an adjunct professor at a law school on the banks of the Charles and loves that dirty water, as she will always think of Boston as her home. You are welcome to take a look at her Facebook author page, or follow @SMartinGlennon on Twitter. All content on this blog, unless otherwise attributed, is (c) 2012-2020 by Stephanie M. Glennon and should not be reproduced (in any form other than re-blogging in accordance with Wordpress protocol and the numerous other wee buttons at the bottom of each post) without the express permission of the domain holder.
View all posts by Stephanie →
This entry was posted in Love and Loss and tagged black and white, camping under stars, constellations, deep greens and blues, giant peach, heavens, husband, limericks, orange, perigee moon, photograph, sepia, stars. Bookmark the permalink.

8 Responses to Orange Suns and Moons