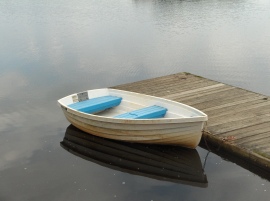 Most of us are taught and internalize the idea that the shortest distance between two points is a straight line.

This axiom may hold true in Euclidean Geometry, but there is a reason pilots fly as they do internationally, and it’s not that they’re taking the scenic route.  Non-Euclideans who perceive the Great Circle know that the various curved paths on a sphere provide the shortest distance between a starting and ending point.

Sometimes I see it as a straight line
drawn with a pencil and a ruler
transecting the circle of the world. . . .

Like yours, it could be anything,
a nest with one egg,
a hallway that leads to a thousand rooms—
whatever happens to float into view
when I close my eyes

or look out a window
for more than a few minutes,
so that some days I think
it must be everything and nothing at once.

But this morning, sitting up in bed,
wearing my black sweater and my glasses,
the curtains drawn and the windows up,

I am a lake, my poem is an empty boat,
and my life is the breeze that blows
through the whole scene

stirring everything it touches—
the surface of the water, the limp sail,
even the heavy, leafy trees along the shore.

Soon after my husband Jim died, people warned that the grieving process does not follow a straight line or a set trajectory.  Nor does it bob gently, breezily, like that empty boat on the water’s surface.

If one favors anime to clinical terminology, there is no linear upward path from the  abyss any more than there is a “Straight Line to Despair!” (notwithstanding “The Grief of Kaioshin“).

My husband was not a man inclined to follow the shortest path, straight or curved.  He saw value in meandering and exploring, slowing down and taking in something that might not quickly–or ever–come his way again.

The CEO of his hospital told of being away at a conference with Jim just weeks before he would be diagnosed with pancreatic cancer.  They sat and talked, facing several stories of glass windows beyond which majestic lightning bolts cracked and danced like fireworks.  The CEO stood because it was time to go to the next meeting.

“No, let’s stay,” Jim told him.  There will be plenty of meetings; let’s watch the storm. 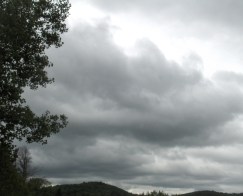 In her spare time, Stephanie works full-time, and then some, as an attorney. She has published articles and delivered talks in arcane fields like forensic evidentiary issues, jury instructions, and expert scientific witness preparation. She also is an adjunct professor at a law school on the banks of the Charles and loves that dirty water, as she will always think of Boston as her home. You are welcome to take a look at her Facebook author page, or follow @SMartinGlennon on Twitter. All content on this blog, unless otherwise attributed, is (c) 2012-2020 by Stephanie M. Glennon and should not be reproduced (in any form other than re-blogging in accordance with Wordpress protocol and the numerous other wee buttons at the bottom of each post) without the express permission of the domain holder.
View all posts by Stephanie →
This entry was posted in Love and Loss, Metaphorical Mathematics and tagged anime, アニメ, Billy Collins, Great Circle, husband, Jim, My Life, pancreatic cancer, poem, shortest distance, sphere. Bookmark the permalink.

9 Responses to The Great Circle