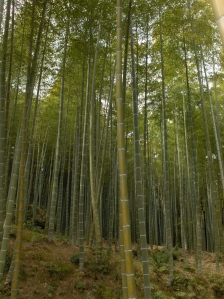 The Boy Scouts of America have an honor society whose membership is intended to be voted upon mainly by Scouts who do not yet belong to it: the Order of the Arrow.  To become a member of this Order, as my son Noah did, one is inducted through Ordeal: he is dropped off in the woods for days, in silence, and fends for himself.

(As with the days surrounding this aptly-named son’s birth, his Ordeal took place in unrelenting, torrential rains.)

During our recent trip to Japan, Noah must have left his compass behind, because we managed to get lost on a fog-shrouded, wooded mountain in Kyoto, having ventured off the vermilion paths of Pi; we were lost but not alone.

A friend gave me a poem by David Wagoner soon after my husband died.  She said it had helped her after her mother died and warned I might not be ready yet for it.  I was not, but I unfolded it today and see in it now so many universal chords in that long, curving path of grief.

Staying alive in the woods is a matter of calming down
At first and deciding whether to wait for rescue,
Trusting to others,
Or simply to start walking and walking in one direction
Till you come out–or something happens to stop you.
By far the safer choice
Is to settle down where you are, and try to make a living
Off the land, camping near water, away from shadows.
Eat no white berries;
Spit out all bitterness. Shooting at anything
Means hiking further and further every day
To hunt survivors;
It may be best to learn what you have to learn without a gun,
Not killing but watching birds and animals go
In and out of shelter
At will. Following their example, build for a whole season:
Facing across the wind in your lean-to,
You may feel wilder,
But nothing, not even you, will have to stay in hiding.
If you have no matches, a stick and a fire-bow
Will keep you warmer,
Or the crystal of your watch, filled with water, held up to the sun
Will do the same in time. In case of snow
Drifting toward winter,
Don’t try to stay awake through the night, afraid of freezing–
The bottom of your mind knows all about zero;
It will turn you over
And shake you till you waken. If you have trouble sleeping
Even in the best of weather, jumping to follow
With eyes strained to their corners
The unidentifiable noises of the night and feeling
Bears and packs of wolves nuzzling your elbow,
Remember the trappers
Who treated them indifferently and were left alone.
If you hurt yourself, no one will comfort you
Or take your temperature,
So stumbling, wading, and climbing are as dangerous as flying.
But if you decide, at last, you must break through
In spite of all danger,
Think of yourself by time and not by distance, counting
Wherever you’re going by how long it takes you;
No other measure
Will bring you safe to nightfall. Follow no streams: they run
Under the ground or fall into wilder country.
Remember the stars
And moss when your mind runs to circles. If it should rain
Or the fog should roll the horizon in around you,
Hold still for hours
Or days if you must, or weeks, for seeing is believing
In the wilderness. And if you find a pathway,
Wheel-rut, or fence-wire,
Retrace it left or right: someone knew where he was going
Once upon a time, and you can follow
Hopefully, somewhere,
Just in case. There may even come, on some uncanny evening,
A time when you’re warm and dry, well fed, not thirsty,
Uninjured, without fear,
When nothing, either good or bad, is happening.
This is called staying alive. It’s temporary.
What occurs after
Is doubtful. You must always be ready for something to come bursting
Through the far edge of a clearing, running toward you,
Grinning from ear to ear
And hoarse with welcome. Or something crossing and hovering
Overhead, as light as air, like a break in the sky,
Wondering what you are.
Here you are face to face with the problem of recognition.
Having no time to make smoke, too much to say,
You should have a mirror
With a tiny hole in the back for better aiming, for reflecting
Whatever disaster you can think of, to show
The way you suffer.
These body signals have universal meaning: If you are lying
Flat on your back with arms outstretched behind you,
You say you require
Emergency treatment; if you are standing erect and holding
Arms horizontal, you mean you are not ready;
If you hold them over
Your head, you want to be picked up. Three of anything
Is a sign of distress. Afterward, if you see
No ropes, no ladders,
No maps or messages falling, no searchlights or trails blazing,
Then, chances are, you should be prepared to burrow
Deep for a deep winter.

Metaphorically, we have lived much of this poem.  I also have fallen far short in striving to emulate my husband, as in one of the passages I find most meaningful:

Spit out all bitterness. Shooting at anything
Means hiking further and further every day
To hunt survivors. . . .

I am constitutionally unable to “[s]pit out all bitterness”; in many ways I remain awash in displaced anger (most recently released upon a process server who arrived upon my doorstep very early yesterday morning and evidently does not frequently endure cross-examination by a sleepless attorney about his jurisdictional bona fides, but that story, again, shall have to await another post).

And my husband Jim wisely looked askance upon my interest in firing actual weapons–even in New Hampshire.

But Jim picked his battles, and I know I need to aspire to do that.  At very least, for our children’s sake, I don’t want to have to hike “further and further every day.” 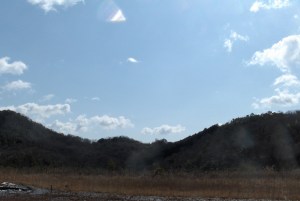 In her spare time, Stephanie works full-time, and then some, as an attorney. She has published articles and delivered talks in arcane fields like forensic evidentiary issues, jury instructions, and expert scientific witness preparation. She also is an adjunct professor at a law school on the banks of the Charles and loves that dirty water, as she will always think of Boston as her home. You are welcome to take a look at her Facebook author page, or follow @SMartinGlennon on Twitter. All content on this blog, unless otherwise attributed, is (c) 2012-2018 by Stephanie M. Glennon and should not be reproduced (in any form other than re-blogging in accordance with Wordpress protocol and the numerous other wee buttons at the bottom of each post) without the express permission of the domain holder.
View all posts by Stephanie →
This entry was posted in Love and Loss and tagged Boy Scouts of America, David Wagoner, grief, husband, Jim, lost, order of the Arrow, philosophy, poem, Staying Alive, woods. Bookmark the permalink.

4 Responses to “Eat No White Berries”