My children always have been drawn to maps and puzzles.

This is something of a family trait.  In a sense, theoretical physics is a lifelong mathematical puzzle.  In a somewhat more experimental way, my younger brother possessed a unique childhood skill: he could draw the entire continental United States, with eerily accurate subdivisions, with one continuous Etch-a-Sketch line.

When my sons were very young, they chose an enormous world map to adorn their bedroom wall.  We moved from bedtime stories and songs to geography quizzes.

They continue continuously to stump me.  During our family travels I listen, and rarely contribute–but for asking for clues–as they quiz their youngest sister:

“Name the twenty-six countries that begin with the letter ‘S.'”

“What’s the longest name of a country capital?”

“What ten countries have only four letters?”

“What’s the only country with two consecutive ‘o’s’?”

“What’s the quickest path from the West Coast to the East Coast if you go through only states whose names start with letters in the word ‘woman’?”

(I’m going to pause here for geography enthusiasts to finish up, though you may be well ahead of me.)

I did not absorb this geographical information as my children did.  But like their dad, they always have been literally aware of their place in the world and of all the wildly different places and people who accompany them on the planet.

Their minds carry vast stocks of factual information about the world, much as mine carries minute remembrances of days and dates past.

All of us are very fond of analyzing words and puzzles of different kinds.

“Mind pops”–or “involuntary semantic memories“–seem to me to occupy both the realm of word puzzles and quite a bit of territory in grief.

A Denmark study is among those which suggest that such involuntary memories regularly may predominate over voluntary ones–even among the non-pathological.  (I would prefer not to dwell on the possible links between my style of recollection and categories of pathology.)

And speaking of Denmark. . . .subconsciously, at least, I must have learned something from my children about world geography.  It seems that several of us shared precisely the same mind pop while responding to a word puzzle.

Success in this puzzle, which feigns mind-reading ability, depends on the extraordinarily high frequency of English-speaking people whose brains immediately will jump to “Denmark”  when asked to think of a country beginning with the letter “D.”

It does not work for us outliers whose minds have been conditioned by our children to jump to “Djibouti” just as easily.

Sometimes I think that a surfeit of memory, like an abundance of knowledge, makes one an outlier–but not in a good way–in grieving.   My involuntary memory is too pliable: rather than making, and trying to contend with, an immediate and obvious connection between a thought or object–or even just a word–and a painful memory; I have a rich and varied menu of psychic aches for which a fleeting thought or sight acts as a tripwire.

Someday this may not be a bad thing, if only I could harness the much vaster array of memories which preceded the loss and the grief.  Perhaps memory then could be as described by Dorothea Grossman:

It is not so much that I miss you
as the remembering
which I suppose is a form of missing
except more positive,
like the time of the blackout
when fear was my first response
followed by love of the dark. 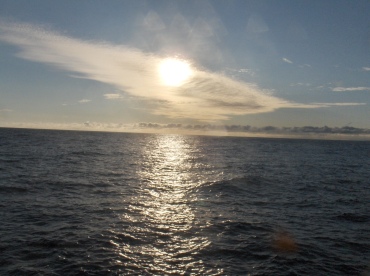 In her spare time, Stephanie works full-time, and then some, as an attorney. She has published articles and delivered talks in arcane fields like forensic evidentiary issues, jury instructions, and expert scientific witness preparation. She also is an adjunct professor at a law school on the banks of the Charles and loves that dirty water, as she will always think of Boston as her home. You are welcome to take a look at her Facebook author page, or follow @SMartinGlennon on Twitter. All content on this blog, unless otherwise attributed, is (c) 2012-2020 by Stephanie M. Glennon and should not be reproduced (in any form other than re-blogging in accordance with Wordpress protocol and the numerous other wee buttons at the bottom of each post) without the express permission of the domain holder.
View all posts by Stephanie →
This entry was posted in Love and Loss and tagged Denmark, Djibouti, geography, grief, loss, memory, mind pops, orange kangaroo, word puzzles. Bookmark the permalink.