While we waited for oncology appointments, Jim and I worked on puzzles.  There seemed to be a certain order to the recycled puzzles out on a table in the waiting area.  The most fiendishly difficult one featured baroque angels in pastel colors; their curls could not easily be distinguished from the background of clouds swirling in a pale blue sky, or the tufts of their enormous slate-tinted feathered wings.

I considered a bevy of angels an interesting choice of subjects for a cancer treatment waiting room, but I’m not sure that much thought went into it.  The puzzles were there for idle hands and somewhat low energy levels, for filling time as family members wandered around the maze of pods where chemotherapy drugs were being infused into people they loved.  Jim was there for twelve hours at a time when he had aggressive treatment, and I often found myself back at the puzzle table as he slept.

He and I seemed to be the only ones who worked on the puzzles, which awaited us unchanged between appointments.   We would finish one and find it replaced with a different box and jumble of loose pieces the next time we came.

Jim was a puzzle master, and meticulously would organize clusters of tiny cardboard pieces into similar families.  He was patient in that–and many other–ways.

I’m more of a grab-a-piece-and-see-if-it-fits somewhere kind of a person.

We made a pretty good team.

Recently some of my children and I vacated our house for it to be shown to a potential buyer.  We wandered to the library, where my children discovered a 1000-piece puzzle laid out, barely started, on an old oak table.  Quickly and quietly, they began filling in the pieces.  Soon they had placed each one of them.  Having done so, they realized that this puzzle was missing a single piece.

Many things go missing these days.

Within minutes of my extracting the bounty of a chocolate bar from my car this morning and putting it on a kitchen counter, a square of it mysteriously had vanished, although the golden wrapper had been carefully reconstructed so it appeared as if the bar were still whole.  One would have to survey it carefully to know it was missing a piece.

I have developed a peculiar eye for the missing space, the blank line, the open vista.  (Admittedly, my perceptions are not always accurate.)

As usual, one of Jose Saramago’s characters–in this instance a painter who filled blank canvases–had something intriguing to say about empty spaces: “A blank space, were it possible to differentiate it from the margins, would suffice to say all that can be said about me.”

My house is for sale.  I have signed reams of paperwork alone, on the left side of the paper, where Jim always signed first.  Next to my signature is always a blank line where another seller would have signed.

Just days ago I received (so far) the worst related bureaucratic offense (from an institution whose CEO will be getting quite a letter from me one of these days): a company with which I have been dealing for the better part of a year about correcting its paperwork after  my husband’s death sent me a letter with a blank form.  It asked me to have my spouse sign the empty spaces in the presence of a notary.

I informed the unhelpful woman who answered my call that, given all the hoops her company already had me jump through and the many copies of the death certificate I had provided to it, this last request was going to be difficult to fulfill.

My tone of voice was, shall we say, somewhere beyond withering.

Yesterday I drove to Western Massachusetts.  Mysteriously, my GPS took me an entirely new way to the same destination I had sought out many times before.

This time, for the first time, I saw the verdant back stretch of a cemetery I had always seen from the front, where its markers crowd very close to the noise and bustle of a major  road.

In back, however, there is a broad swath of empty lime-green grass.  It is quiet and borders a small country road laden with sunflowers.  I found the green vista so much more comforting than the solemn headstones.

My husband will not have a headstone, as he had other plans for himself.  Jim is always among greens and blues for me.

When I arrived in South Hadley I looked up and saw a magnificent hawk hovering, slowly circling overhead as if he had been waiting for me to arrive at that spot.  It was precisely where Jim and I had visited a daughter who spent several summers on the Mt. Holyoke campus.

In the center of the campus, beneath the tree above which the hawk hovered, was an empty forest-green wood chair I did not remember ever having seen before. 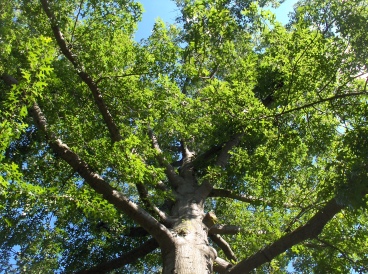