A new neighbor was told that on a certain day in November–despite a location at 43 degrees North–a single rose would bloom in front of the home into which she was moving.

And every year it did.

The woman who told her this was of a vintage prompting her to refer to the critical date, which we know now as Veterans Day, as Armistice Day.

An armistice is very much unlike the calm before a storm; it is a lull before peace descends.  By design, it is ephemeral: a scheduled but tenuous prelude to peace.

In effect it is a declaration of the hope for peace, of the end of a storm–although of course  during the 1918 armistice and subsequent cessation of hostilities, an even more pervasive world-wide storm soon was to gather.

Both my grandfathers were American soldiers during World War I.  One of them was born in the United States; one was born in Eastern Europe and arrived in New York as a young man.

I remember reading All Quiet on the Western Front for the first time decades ago, and being overwhelmed by a sense of the serendipity of circumstance–in that case of being born of an age to be conscripted into service as a boy in World War I-era Germany.  In the voice of the central character: “We were eighteen and had begun to love life and the world; and we had to shoot it to pieces. The first bomb, the first explosion, burst in our hearts. We are cut off from activity, from striving, from progress. We believe in such things no longer, we believe in the war.”

As I read, I felt for these characters–older than I at the time but younger than my sons now are–and contemplated how little control one has over facets of life as profound as birth and death.

I was born to one flag, and possess two American flags now: one belonged to my grandfather and the other was flown over the United States Capitol on the date chosen by my Eagle Scout son: March 22, the day his father died.

Jim did not serve in the armed forces, but he engaged in a profession and a life of service.  There are so many admirable ways to serve people and causes, and to avail oneself of one’s own serendipitous place at the party.

I know not where is that Promethean heat
That can thy light relume. When I have pluck’d thy rose,
I cannot give it vital growth again,
It must needs wither:–I’ll smell it on the tree.– 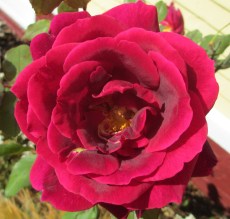 We can watch the storms, and savor the lulls.  And hope for peace.

4 thoughts on “An Armistice Rose”