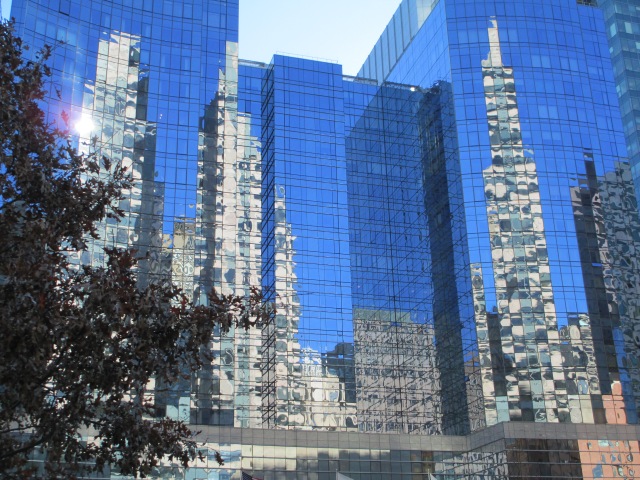 I am not one of those people who never makes the same mistake twice.

I took the wrong exit once again this week and found myself stopped in traffic at a long red light at precisely the same spot where I had taken a picture in July.  The earlier picture, which I took on my way to a wedding, is bathed in silver and gray.

Just as I believe there are good and bad kinds of haunting, there are both wistfully sad and hopeful forms of renewal.  Sometimes they lie in the same place or event.

My lawyer-author friend has written of the renewing power of immersion in blue water: “How often do I douse myself in water, hoping the submersion will preserve me, reconstitute the days and years that have simply flown by…”   These are of course the same waters which have caused her part of the world and others enormous devastation.

The Boston skyline has been renewed.

The sky itself seems to have been refreshed, sparked into my favorite blue.

Boston is where Jim and I began our married life.  We returned to it during his last months to wander together through parts of the city which have been architecturally reconfigured and recharged (including the magical transformation of a jail into an upscale hotel: who would have thought?).

Sometimes, when Jim was under anesthesia and I clutched my frigid cell phone awaiting news, I wandered these streets alone, marveling at how much and how little had changed.

We first began really seeing the breadth of the city’s transformation–and the amazing retention of so much of the atmosphere the city had when Jim and I lived there, in The Before–only when Jim and I returned to Boston to hear the worst imaginable news about his diagnosis and failed treatment.

We looked out from a new high-rise medical office building only hours after finding out my young husband’s affliction was inoperable and incurable, and were within sight of our first tiny apartment.

Every day throughout his illness I think we subconsciously renewed our wedding vows, and very consciously saw all there was to see.  Jim lived out those vows.  I live them still.

Just as Alfred Lord Tennyson poetically preferred love and loss to “never having loved at all,” I am glad for having seen and experienced the things I now grieve.

As a Jose Saramago character observed in All the Names, “What the eye doesn’t see the heart doesn’t grieve over.”

Saramago is in good company with a fictional bear of very little brain: “How lucky I am to have something that makes saying goodbye so hard.”

Grief is not all and always awful.

In her spare time, Stephanie works full-time, and then some, as an attorney. She has published articles and delivered talks in arcane fields like forensic evidentiary issues, jury instructions, and expert scientific witness preparation. She attended law school on the banks lso is an adjunct professor at a law school near the banks of the Charles River and loves that dirty water, as she will always think of Boston as her home. You are welcome to take a look at her Facebook author page, or follow @SMartinGlennon on Twitter and @schnitzelpond on Instagram. Bonus points for anyone who understands the Instagram handle. All content on this blog, unless otherwise attributed, is (c) 2012-2021 by Stephanie M. Glennon and should not be reproduced (in any form other than re-blogging in accordance with the wee Wordpress buttons at the bottom of each post) without the express permission of the domain holder.
View all posts by Stephanie →
This entry was posted in Love and Loss and tagged All the Names, Gae Polisner, Jose Saramago, photograph, renewal, tagaday, Winnie the Pooh. Bookmark the permalink.

8 Responses to Renewal: Bathed in Blue