During the past several months I’ve probably given more thought to the idea of “home” than I ever had before.

“The Glennon family was home,” said Uncle Randy at my husband’s memorial service, referring to Jim’s purchase of his very old dream house and land.  With an eight-acre pond.  Jim, who did not long for many things, always had yearned for a pond.  On this unnamed pond, he taught his children and their friends and his nieces and nephews to ice skate.

Jim built benches to drag out onto the ice so children could sit there and he could glide over on his hockey skates, winter jacket flapping open and cheeks as rosy as the toddlers’ were, and pull tightly on their laces and double and triple-knot them.  Then Jim would smoothly skate backwards, holding small hands with fingers ensconced in bright hand-knit frog-shaped or dinosaur-patterned mittens.

One winter Jim and I skated over the pond’s thick frozen surface and I looked down and saw fish swimming beneath us, in blue water clouded over by waves of frozen silver.

The pond and surrounding woods attracted animals of all kinds.  Jim took his camera down to explore and take pictures of swans, red fox and newborn kits, herons, beavers and their formidable dams.

The sun would rise over Jim’s pond, beyond the broad arc of his bountiful bird feeders.  I have never seen so many sunrises as I did during the sleepless nights of his illness, when the fear of missing a waking moment with him–even as he slept–seemed more than I could bear. 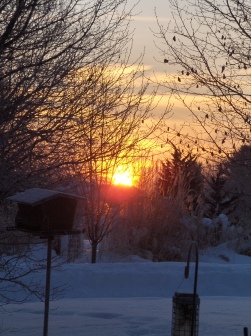 The house itself was and always will be “Jim’s house.”  The new part was built in 1805.  Its thick glass window panes, Indian shutters, original FBUSs (Floor Boards of Unusual Size), ten fireplaces and two brick beehive ovens reminded him of old houses he had worked on with a favorite uncle when Jim was growing up.

As with a Marilynne Robinson character (a widower who remained in the home he had shared with his wife and many children) in Home: “The house embodied for him the general blessedness of his life, which was manifest, really indisputable.” “Such times you  had!” the widower told a daughter revisiting the house–“as if the present slight desolation were confetti and candy wrappers left after the passing of some glorious parade.”

At hospital after hospital during the past year I have spoken of Jim’s end-of-life wish to come home to this old house and land of his, and not to die in a hospital.  It was the wish our children and friends and family could make come true for him.

We do not live there anymore.

So where is home now?  It’s not a house.  Jim and I occupied a series of places together, but home is no longer the place I share with him and our children.

Without Jim and as our children grow into independent beings, grief’s siren song of  solitude has made me aware that a house alone can never be my home again.

I realize I am lucky to have a place to live.  But as Jose Saramago wrote in The Cave, “I don’t doubt that a man can live perfectly well on his own, but I’m convinced that he begins to die as soon as he closes the door of his house behind him.”

Being alone in any place, I am convinced, is not for the perennially grieving.

For me home is not necessarily a place of any kind.  When someone speaks the words, “It feels like home,” I feel that he or she is signifying a sense of belonging–of having arrived where one was meant to be, where one feels welcome and a part of something larger than one’s self.

I feel at home back at work.

Wherever we are, I feel at home with my children.

I feel at home with beloved friends.

I feel at home with the band in which all my children have been part of a musical whole.

Wrap up your questions, keep them down, let the water lead us home. . . .

I feel at home by the ocean.

Someday it is possible I may even feel at home in a house Jim never shared with me.