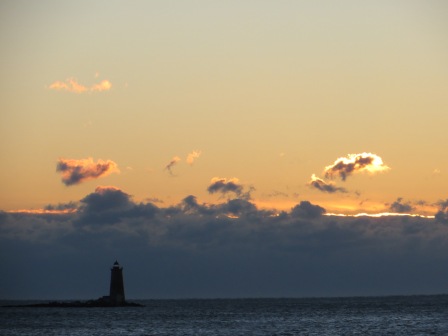 The morning of January 7th was bright blue, clear, cold–though not nearly as bitingly frigid as today.

The almost-five of us went to Exeter for breakfast for three.  I could not eat because our child . . . who I was quite sure would be David, a third son . . . was scheduled to be delivered in Portsmouth at noon.  We had been bumped from the early morning OR schedule because of another mother’s emergency, and found ourselves with a few extra hours of time on our hands.

Jim and I drove to drop off our little boys with Mama Kaya, who a few days earlier had told me with assurance that this baby was a girl.   (Jim thought so, too–and he was two-for- two; I had managed to whiff on gender, though I could always guess correctly when it came to others’ progeny.)

We all stepped hand-in-hand across ice beribboned with undulating, windswept swaths of fresh snow, and I planted kisses on Sam’s and Noah’s icy cheeks, my mittens sinking into the blue down of their pint-sized winter coats during a lingering family hug.  At the ages of one and three, they were less concretely aware of the day’s dimensions.  They knew only that we would soon have exciting news for them.

Still, it was not time to report to the hospital.  Jim and I drove to Odiorne Point, where we were the only humans in sight on that winter day.  We went to the shore’s rocky edge, where Jim took a few pictures in the blinding light.

Jim was still hungry.  We stopped at a nearly empty restaurant on the harbor.  A waitress saw me–twenty-two pounds of baby and accoutrements compacted under brilliant blue pinwhale corduroy–and asked, “When are you due?”

She gave me a hug. 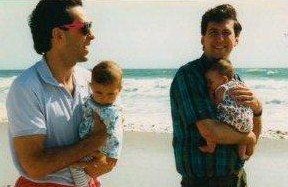 Julia (left) and Emma (right), first daughters with their dads

And soon our baby arrived.  Jim saw her first, as she was lifted from my abdomen.  (He could stomach the surgical view.)

“Now we’re going to have to come up with a girl’s name,” he said.  He shared his top three choices–Molly, Holly, and Emma–with the considerable number of people in the operating room.

“I have a dog named Holly.  A Rottweiler,” said one physician.

Later, as we swaddled our first daughter in my room, a nurse came on shift and introduced herself.

Jim and I looked at each other and laughed.

Compared to her brothers, Emma was a petite baby, with a full head of fine hair, cupid lips, and enormous deep blue-gray eyes.  Gorgeous beyond gorgeous, as she still is.

And she was preternaturally wise.  In the car once, as we drove to get groceries, it registered on me that the radio announcer was quoting a basketball player who spoke of a God-given victory.

My little girl piped up from the backseat.  She was young enough that she still used a car seat.

“It’s not that, mommy.”  (My youngsters were more than accustomed to both my word usage and my random rhetorical rambles.)

“I don’t think he’s saying God makes people win games.  People who believe in God that way aren’t praying to win things.  It’s that they see God at work in every part of their lives.”

Emma has taught me to pronounce words like Schadenfreude and Bangladesh  (though almost all of my children still make fun of me when I pronounce “croissant” correctly, and I set off quite a laughing fit every time I do so at a drive-through.)

She is now a Global Health Scholar, poised to do summer research in disease transmission. She has planned important trips for all of us and taught us how to travel internationally.  She let us tag along with her to Japan when she presented a paper in Kyoto.

She spoke the sweetest eleven words ever spoken when she said goodnight to her father the night before he came home from the hospital to die.

She searched worldwide poetry archives to find the perfect poem (extracting a single word, “sixty”) to read for him at his service, Louis Untermeyer’s “A Man”:

. . . I thought of you . . .
And it was like a great wind blowing
Over confused and poisonous places.
It was like sterile spaces
Crowded with birds and grasses, soaked clear through
With sunlight, quiet and vast and clean.
And it was forests growing,
And it was black things turning green.
And it was laughter on a thousand faces . . .
It was, like victory rising from defeat,
The world made well again and strong—and sweet.

Today, officially, is the beginning of her chronological adulthood. 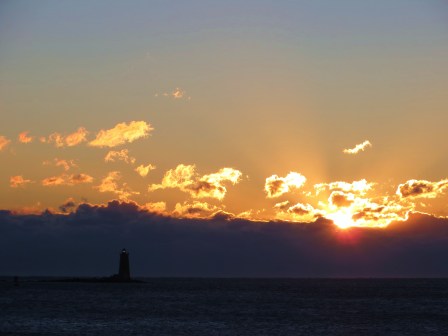 In her spare time, Stephanie works full-time, and then some, as an attorney. She has published articles and delivered talks in arcane fields like forensic evidentiary issues, jury instructions, and expert scientific witness preparation. She also is an adjunct professor at a law school on the banks of the Charles and loves that dirty water, as she will always think of Boston as her home. You are welcome to take a look at her Facebook author page, or follow @SMartinGlennon on Twitter. All content on this blog, unless otherwise attributed, is (c) 2012-2020 by Stephanie M. Glennon and should not be reproduced (in any form other than re-blogging in accordance with Wordpress protocol and the numerous other wee buttons at the bottom of each post) without the express permission of the domain holder.
View all posts by Stephanie →
This entry was posted in Love and Loss and tagged birthday, childbirth, daughters, Emma, Louis Untermeyer's "A Man", postaday, Weekly Photo Challenge: Beginning. Bookmark the permalink.