Overhead at the spot where we married, Memorial Church, Cambridge, Massachusetts

” . . . [T]here are three people in a marriage, there’s the woman, there’s the man, and there’s what I call the third person, the most important, the person who is composed of the man and woman together.”

–Jose Saramago, “All the Names”

” Because, you know, you and your spouse are, like, one.”

I’d like to weigh in as a mom.  One with young daughters and sons.  The remaining member of a couple who lived out our wedding vows until–and in a way after–death us did part.

I believe in osmosis–the continuing two-way exchanges within a good marriage.  It’s not so much that one consciously molds or shapes a partner, but I think sustaining loving relationships let us incorporate the best parts of one another.

The person the two of you become can be a better human being than the people you once were.

(I refuse to link to an original mom “manifesto,” issued by, I am somewhat pained to say, a fellow alum who produced two sons.  She wrote an open letter–published in the school newspaper of the university her son then attended–exhorting the nubile female undergraduate population promptly to set about seizing husband material from the upper classes.  In a subsequent self promotional tour, she paused theatrically and announced, without benefit of a preceding question, “Yes, I went there.”  To which John Stewart responded, “Where?  The 1950s?”). 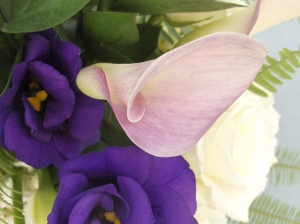 I’ll spare you reading that screed and report that–while celebrating the supposed uber-marriagability of her sons and their male classmates–her clarion call to to other mothers’ daughters did not contain a single discussion of love, kindness, faith, grace, friendship, or anything like a commitment of souls for better and worse.

Your College Romantic Relationships, or Lack Thereof, Will Not Doom You. 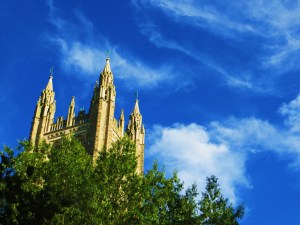 First a disclaimer: I happen to have married a man I met when I was a teenage college student.  It was a statistical improbability that this relationship would last.

He broke up with me after nearly a year.

I didn’t take it all that well.

What he said, with some puzzlement at my surprise: “Did you think it would last forever?”

What he didn’t say, but what I read in his decision and discomfort: “You’re my first girlfriend.  We’re still teenagers.  Neither of us has any experience with a serious relationship.  How could this possibly survive?”

As it happened, he reconsidered.  And it did last forever.

Jim’s Closing Ceremonies took place in a church on a school campus, attended by multitudinous children and teenagers.  The Reverend commented on the beginning of our marriage.

“And don’t rush it, guys,” he told them. “But if you chance to meet someone at seventeen and think, ‘This is my life partner,’ know that sometimes it works.”

The key word here is chance.  Happenstance.  Serendipity caused us to meet.  A confluence of love and hope and compatibility, as well as innumerable concrete events we did not control, led us to marry.

Had any number of other choices been made in either of our lives, no doubt we would have had other relationships and become very different people.  But I guarantee that the quality of the marriage wasn’t influenced by us attending the same college.

If my own children one day emerge in their adult lives with partners they had in college, then great.  And if not, great.  I will never subscribe to, let alone ply, the misguided notion that a “name” school is necessarily the ideal breeding ground for . . . well, finding someone with whom to breed.

I do believe that everywhere my children have gone and will go–from the playgrounds where they ephemerally encountered fellow littles (hat tip to E.  Lockhart)  to the coffee shops they may frequent; from the bands, dance troupes, trivia nights and game boards where they gather to the far-flung countries where they are immersed in different languages and cultures–is a way to learn how to love and value other people.

If romantic love comes to town along with that, fine.  And if not–as any widow or widower can tell you–that’s not all there is.

The capacity to love, wherever you found it, endures.

It’s Not About the Chemistry.

“When two people are under the influence of the most violent, most insane, most delusive, and most transient of passions, they are required to swear that they will remain in that excited, abnormal, and exhausting condition continuously until death do them part.”

“I know you’re not afraid
To go alone
But this was a marriage of spirit, flesh, and bone
Now whatcha gonna do
When the planet shifts
Whatcha gonna do
Gonna slit your wrists
Bleed all over the Milky Way
The stars in your eyes look red today”

A divorced acquaintance observed that when he enters into a new relationship, “It’s all about the chemistry, isn’t it?”

It was rhetorical, so I didn’t speak the answer that immediately came to mind: “No.”

No, no, a thousand times no.

It’s not that chemistry and attraction are bad things, but if that’s the primary draw. . . . Well, good luck with that.

It Will Get Rough.  You Will Get Hurt.  Commit Anyway.

“You can’t just commit to the first thing that comes along. But you can’t wait and miss your opportunities. You have to struggle against the signals of your culture and commit to serious things that will give your life significance. Once you pounce on your commitment, you have to dig your teeth in, and hang on in good times and bad.  For example, you will be called upon to commit yourself to a husband or a wife. This won’t be an abstract proposition. It will be with a real live person, with a name, a face, unwanted odors and body hair. You will have to ask yourself, is this the person I want to marry?  . . . . If you have a great career and a bad marriage, you’ll be miserable. If you have a great marriage and a bad career you’ll be happy.”

“You can cut all the flowers but you cannot keep Spring from coming.”

About half of marriages ends in divorce.  By arithmetic even I can follow, the other half ends in death.  Along the way, it’s bound to be an occasionally bumpy ride.

Most marriages are interspersed with some kind of conflict, and many of them survive.

I’d take an occasional burst of temper, though my husband exhibited none during our many years together.

I’d take a raised voice, though I was the only spouse guilty of that.

But I believe that among the things a relationship cannot withstand is derision.  I believe that feeling contempt toward another person is never merely a flash in the pan; it betrays an attitude that can’t be undone.

I believe you will never have a healthy and truly loving relationship with someone for whom you feel any degree of contempt.

If you are capable of looking down upon a mate and believing you occupy a superior space in this life, that person is not–and never will be–a truly equal and cherished life partner.  (If, for example, it occurs to someone to characterize her groom as having attended, say, a Long Island school “of almost no name recognition,” and nonetheless raise children with that person, then I believe my puppy–who flunked out of pretty basic dog school of zero name recognition–could have foretold her chance of living out her marriage vows.)

Perhaps it is the fear of being judged and belittled that sometimes prevents us from fully sharing ourselves with others.

But, to borrow a metaphor from The Avett Brothers, in the best relationships you need to show your skeleton.

Sometimes it’s the words and sometimes it’s just sharing a supportive silence, but the only way to love and be loved deeply is to risk baring what’s in your heart–even, and perhaps especially, when your heart’s been broken before.

“Let me see your skeleton
Well before your life is done”

And, don’t mistake me: you don’t ever need to be married.  But you do need to love, in your way, the best you can.  And you will.

In her spare time, Stephanie works full-time, and then some, as an attorney. She has published articles and delivered talks in arcane fields like forensic evidentiary issues, jury instructions, and expert scientific witness preparation. She also is an adjunct professor at a law school on the banks of the Charles and loves that dirty water, as she will always think of Boston as her home. You are welcome to take a look at her Facebook author page, or follow @SMartinGlennon on Twitter and @schnitzelpond on Instagram. Bonus points for anyone who understands the Instagram handle. All content on this blog, unless otherwise attributed, is (c) 2012-2021 by Stephanie M. Glennon and should not be reproduced (in any form other than re-blogging in accordance with the wee Wordpress buttons at the bottom of each post) without the express permission of the domain holder.
View all posts by Stephanie →
This entry was posted in Love and Loss and tagged "Dewy Adorable Days Gone By", "The Real Housewives of New Jersey", Cambridge, Donna Tartt, E. Lockhart's "We Were Liars", Exeter, George Bernard Shaw, Greg Brown's "Down at the Dream Cafe", John Hiatt's "Cry Love", John Stewart's "The Daily Show", Jose Saramago's "All the Names", loss, marriage, Memorial Church, motherhood, Phillips Church, Reverend Bob, Weekly Writing Challenge: Manifesto, widowhood. Bookmark the permalink.