A silhouette is the blurred edge’s opposite: it is defined by its solidity, its opacity–by the razor’s edge of its contrast with whatever lies beyond.

My favorite silhouette doesn’t exist in a photograph, but I will be able to see it forever: the last time he was able to walk out of our house, my husband Jim stood and leaned on our children and friends, outlined fully within an enormous orange perigee moon that enveloped our portion of the world.

I can–and often do–aim my camera at enormous swaths of sky, but I end up with glorified color swatches: squares of swirled and striated colors without clues to attach them to the experience of being in a given place.

If, however, there’s a silhouette out front, I know exactly where I was when I took that picture.  I can call back to my senses the feeling of sub-zero fingers on my conductive camera, the frustration of buzzing mosquitos as I aimed at sunset along the shore, the smell and crackle of late autumn leaves as I traversed a path facing West.

However, although solidity is their hallmark, silhouettes often reveal something that isn’t there at all.

A puppy’s silhouette, cast by winter sunlight onto snow, can distorted and enlarge him into a King Among Beagles.  Silhouettes against spring petals can add texture and heft to open flowers.

Sometimes silhouettes transmit a mood: the peace of pastel skies beyond leaves not yet crisped, curled, and unmoored by winter; the energy of swiftly moving crowds of clouds beyond a bridge’s cables; the slightly sinister feeling engendered (at least among Hitchcock fans) by birds congregating above en masse against endless gray.

Night’s lights can imprint onto walls silhouettes of what is no longer there, like the reverse image of a film negative, or the momentarily searing after-images lit by photographic flashbulbs of yore. 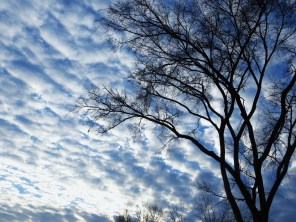 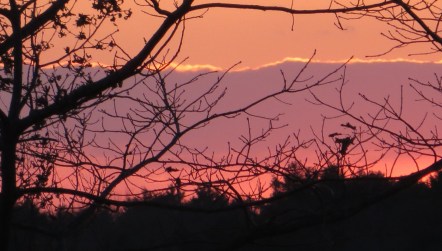 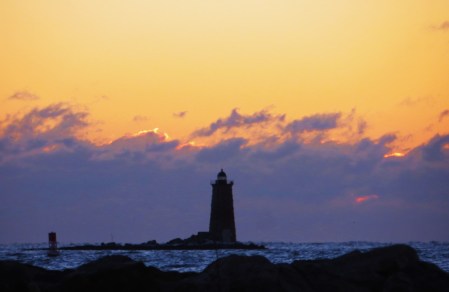 In her spare time, Stephanie works full-time, and then some, as an attorney. She has published articles and delivered talks in arcane fields like forensic evidentiary issues, jury instructions, and expert scientific witness preparation. She also is an adjunct professor at a law school on the banks of the Charles and loves that dirty water, as she will always think of Boston as her home. You are welcome to take a look at her Facebook author page, or follow @SMartinGlennon on Twitter. All content on this blog, unless otherwise attributed, is (c) 2012-2020 by Stephanie M. Glennon and should not be reproduced (in any form other than re-blogging in accordance with Wordpress protocol and the numerous other wee buttons at the bottom of each post) without the express permission of the domain holder.
View all posts by Stephanie →
This entry was posted in Love and Loss and tagged John Hiatt's "Gone, photography, postaday, silhouettes, tagaday, Weekly Photo Challenge: Silhouette. Bookmark the permalink.