Loneliness is an interesting feeling.

Interesting, you ask?  How neutral.  How unilluminating.  How non-judgmental.

My feelings about loneliness have been pretty darn negative.  I’ve written about unwanted solitude as a vacuum, an inescapable shadowed partner to despair.  I’ve bemoaned the loneliest number.  I’ve even referred to closing the door of one’s home, remaining alone inside, as a step towards death.

And of course a person can neither experience nor dispense compassion without at least one human being on the other end.  It’s a tandem event.

But is loneliness always steeped in black?

Overwhelmingly, I take my best photographs when wandering by myself–as the sun rises, as rainbow skies edge into black, as mist rises from the sea’s surface and swallows evidence of humans going about their daily business. I have never even glimpsed another human being at the spectacular lonely spot where I most frequently take such pictures.

In the wee hours of most mornings, including this one, being by myself–during all seasons, in outside places I never would have ventured were my spouse still at home with me as we both began a day–makes me notice things I would not have experienced but for having been left behind, alone, by death.

Within these spaces, solitude’s silences are punctuated by noises which are nearly impossible to hear amidst even the smallest of maddening crowds: the startling click of a falling acorn, signifying summer’s softly edging into fall; the scurrying and rustling of chipmunks; a bird’s lilting two-note call.  I hear the ocean.  I hear the wind.  I even hear ice splintering.

When I am by myself, pictures and thoughts come to me and begin transforming themselves into words (and into blog posts).

Jim tends to visit me when I am alone . . . or have a minimum of corporeal company.

Generally I indulge in my artistic impulses only when I am alone.  I find that art is neither for the faint-hearted nor amenable to group input.

Let’s consider the Dreaded Empty Nest.  Mine will be empty very soon. I will be alone, but for my canine companions.

This is the time of year when children clear out in droves from the houses in which they were reared, heading for school or beyond.  Many of their parents, my friends, begin thinking of themselves as “empty nesters,” in a negative way.

This makes me cringe just a little bit.  (I am at least consistent in overreacting: I recoil when people proclaim themselves “single parents” despite sharing custody of the children in question.  I don’t care how much you hate your ex-spouse or how dreadful an influence that person is on your children; you aren’t a “single parent” when more than one living person takes on some portion of the burdens and wonders of parenthood.   If your ex happens to be a malignant narcissist or otherwise does your children more harm than good, I’m sorry for all of you . . . but you’re still not a single parent.)

A child with more than one involved parent does not have a single parent.

And a house with a spouse is not an empty nest.

But if you do find yourself alone, both in a truly empty nest and wandering in the world outside it; it still isn’t all bad.

Sure, sometimes you have to stretch to find gold in those hills: when it’s just you, for example, you’re far more likely to recognize the contents of your laundry hamper.  And I certainly never fail to put gas in the tank, or pick up more milk when I’m the one to use it up (not mentioning any names here, kids).

I realize I’ve finessed the line between loneliness and solitude, which for me has to do with volition.  I’m alone by death, not by any kind of choice.

But here’s my mildly shameful secret: even when I wasn’t so shockingly alone as a parent, there were times I wanted to be by myself.  The persistent demands of a job and marriage and four children under the age of five could be a wee bit taxing on my supply of patience and energy.

And now that I’ve been forced into a large measure of solitude, I find that neither being alone nor even the darkness itself is always filled to the brim with sorrow. 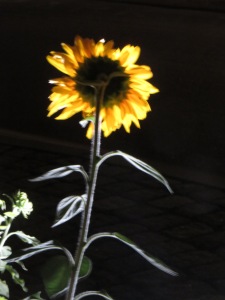 5 thoughts on “The Empty Nest”