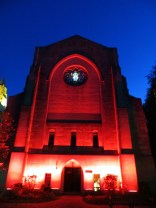 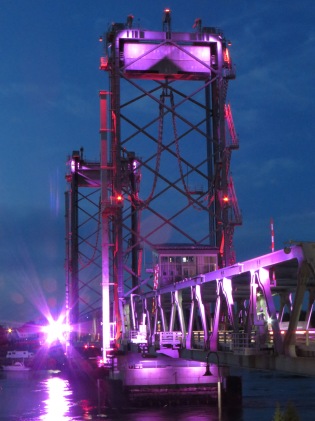 It’s not always dark at night.

But sometimes the transition between day and night is unmistakable.

The day may fade into ho-hum waves of gray-blue, but—just as one is tempted to look away–the horizon can blaze back in a band of coral and lavender before settling in for the night.  Or a city might surprise us by bathing a building or bridge in startling new colors.

And sometimes nightfall brings not a lingering, shimmering sunset rainbow, but breaks into black depths described by Charles Wright:

“Clear night, thumb-top of a moon, a back-lit sky.
Moon-fingers lay down their same routine
On the side deck and the threshold, the white keys and the black keys.
Bird hush and bird song. A cassia flower falls.” 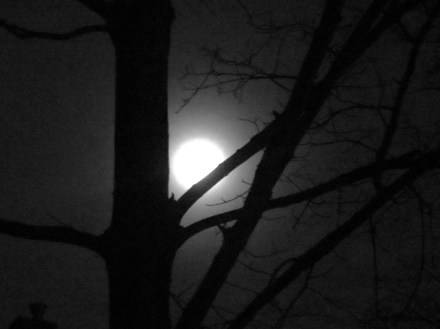 In her spare time, Stephanie works full-time, and then some, as an attorney. She has published articles and delivered talks in arcane fields like forensic evidentiary issues, jury instructions, and expert scientific witness preparation. She also is an adjunct professor at a law school on the banks of the Charles and loves that dirty water, as she will always think of Boston as her home. You are welcome to take a look at her Facebook author page, or follow @SMartinGlennon on Twitter and @schnitzelpond on Instagram. Bonus points for anyone who understands the Instagram handle. All content on this blog, unless otherwise attributed, is (c) 2012-2021 by Stephanie M. Glennon and should not be reproduced (in any form other than re-blogging in accordance with the wee Wordpress buttons at the bottom of each post) without the express permission of the domain holder.
View all posts by Stephanie →
This entry was posted in Love and Loss and tagged Charles Wright's "Clear Night", darkness, Nighttime, postaday, Ray Charles' "Night Time is the Right Time", Weekly Photo Challenge. Bookmark the permalink.

6 Responses to The Right Time