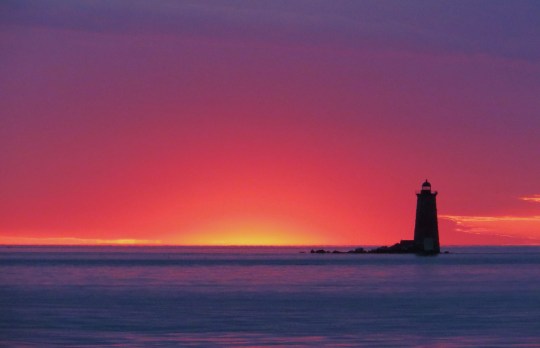 The stirring sun’s strands seem to gather into an outsized hand.  A finger pokes the lighthouse from offstage, an entreaty to shake off that opaque midnight black and join the horizon’s color riot.

Given the weather, this sunrise had not seemed at all promising.  But I was up, the beagles were fed and walked, traffic on the way to work was unlikely to have yet ensnarled  . . . and so I hauled myself the extra few miles to look out at the Atlantic before dawn.

Today is Jim’s birthday.  He’s not here to grow older, so I have to figure out how to celebrate it for him.

I’ve already marked this day by having philosophical discussions with a 4.6 pound beagle puppy, and by contemplating the nature of beauty in the form of a blurry picture of a bird.

This time I decided to simply honor Jim’s love of being outside.

Jim wanted us to get outside every day, to flex our muscles and feel the air.  He was always ready for whatever was out there. 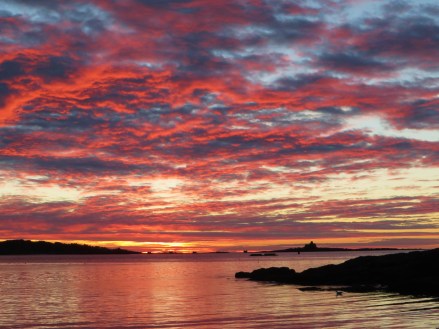 To my perpetual amazement, it seems that the skies and oceans and mountains and woods which beckoned him are out there still.

Jim always knew when “tomorrow it would be raining.” Strangely, his attention to future probabilities has made me less timid, more willing to venture into the new and uncertain. Since his death, on occasion this has taken me fairly far out of my wheelhouse (not to mention outside the evident comfort zone of international security forces at the G8 summit).  On most days the adventures are not so dramatic, and I find myself on a solitary hike that I never would have taken alone when he was here.

My own attention to (and preparation for) predicted weather is at best inexact.  From day to day I’m not sure I really want to know what the landscape will look like.

Or maybe it’s that I don’t like to get my hopes up any more.  I allowed myself to do so once, not long ago, when meteorologists buzzed about a dropping Hunter’s Moon about to coalesce with sunrise.  I hiked out long before dawn, but it was a bust.  I was drenched and lost in unseasonably cold, drab woods.  The miraculous moon proved invisible, a bloodless blue indistinguishable from the misty morning sky.

I’d suppose I’d rather have my expectations default to “low” and possibly be pleasantly surprised.

And often I am.  I’ve seen impossibly beautiful sunrises, in classic fall hues and in glassy neon pink and orange.  I’ve stumbled across a tiny strip of beach when the cloud cover was, just that once, so perfectly apportioned that it encased the rising sun with a diaphanous curtain.  Ta-da!

The more I push myself to get out, the more I feel it’s not just that Jim wanted us to linger before these gorgeous panoramas, but also to take in whatever we see along the way–even the wreckage, each season’s natural and man-made flotsam, complicated creations collapsed into a rich mash.  So much lost and so much left behind.

A novel of a post-pandemic world described a version of this paradox: “In the morning light there was beauty in the decrepitude, sunlight catching in the flowers that had sprung up through the gravel of long-overgrown driveways, mossy front porches turned brilliant green, a white blossoming bush alive with butterflies.  This dazzling world.”

In her spare time, Stephanie works full-time, and then some, as an attorney. She has published articles and delivered talks in arcane fields like forensic evidentiary issues, jury instructions, and expert scientific witness preparation. She also is an adjunct professor at a law school on the banks of the Charles and loves that dirty water, as she will always think of Boston as her home. You are welcome to take a look at her Facebook author page, or follow @SMartinGlennon on Twitter. All content on this blog, unless otherwise attributed, is (c) 2012-2020 by Stephanie M. Glennon and should not be reproduced (in any form other than re-blogging in accordance with Wordpress protocol and the numerous other wee buttons at the bottom of each post) without the express permission of the domain holder.
View all posts by Stephanie →
This entry was posted in Love and Loss and tagged beauty, birthdays, Emily St. John Mandel's "Station Eleven", grief, memory, photography, sunrise. Bookmark the permalink.

21 Responses to This Dazzling World