Before the leaves change, light transforms these lucid
speaking trees. The heavy drench of August
alters, things; its rich and sappy blood
relaxes where a thirst ago, no rest
released the roots’ wet greed or stemmed their mad
need to be more. September is the wisest
time — neither the unbearable burning word
nor the form of it, cooped in its cold ghost.
— Anne Stevenson, “Sonnets for Five Seasons“ 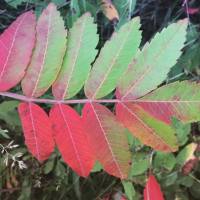 So much change is afoot at autumn’s cusp.  Some of it is gradual, observed day by day as a new palette bleeds across leaves, or petals dry and gather themselves into new guises.  One leaf withers into a luna moth, crumpling steadily from its midline towards its jagged margins.

Some change is so sudden it descends like a dropped stage curtain, a first fall sunset turning from orange to blue and back to neon pink streaked with violet.

Birds’ songs switch out with the changing of the guard as some species flee south.  Notes from nighttime marching band practice float across the city, a swelling synchronicity as the season moves from summer into fall.

“Jupiter” lingers, a mixture of what I can actually hear and what I heard years ago when my children played their parts in the Planets Suite.  The band director will keep some of the old performances’ gems but update sounds and steps to suit the new guard.  I hear the percussion ensemble’s director at practice, rearranging movements and correcting the tempo–then, not now–and smile: “It’s ‘Jupiter, the Bringer of Jollity,’ and you’re playing it like a dirge . . . . ”

My entire life in recent years has undergone a sea-change, into something that has not nearly settled, or yielded grief’s tenacious clutch, but is in measures rich and strange.

In her spare time, Stephanie works full-time, and then some, as an attorney. She has published articles and delivered talks in arcane fields like forensic evidentiary issues, jury instructions, and expert scientific witness preparation. She also is an adjunct professor at a law school on the banks of the Charles and loves that dirty water, as she will always think of Boston as her home. You are welcome to take a look at her Facebook author page, or follow @SMartinGlennon on Twitter. All content on this blog, unless otherwise attributed, is (c) 2012-2018 by Stephanie M. Glennon and should not be reproduced (in any form other than re-blogging in accordance with Wordpress protocol and the numerous other wee buttons at the bottom of each post) without the express permission of the domain holder.
View all posts by Stephanie →
This entry was posted in Love and Loss and tagged Ariel's Song, Gustav Holst's "The Planets Suite", Jupiter: The Bringer of Jollity, marching band, postaday, The Tempest, Weekly Photo Challenge: Change. Bookmark the permalink.

5 Responses to These Speaking Trees