Signs from above need not bring you to your knees.

Nor do the bright copper departed always tap at your shoulder, or tickle your heel.

Messages and messengers  that appear in forms our five senses perceive–a touch, a bird’s rustle, a radio song–seem to have tapered off, replaced by no less vivid flashes no one but I can see, and which are more clearly demarcated as memories rather than Sixth Sense-style visits.

Has my husband Jim become like Rainer Maria Rilke’s departed “quiet conjurer,” who “beneath the mildness of the eyelid mix[es]” his “bright traces into every seen thing”?

This part of grief seems to travel in more or less one direction, from the externally visible to the internal. I can point someone else’s attention to a moth or a butterfly, which they can see.  I can only superficially describe what resides within me: the tangle of trip wires prepared to carry me back in time during every waking moment. 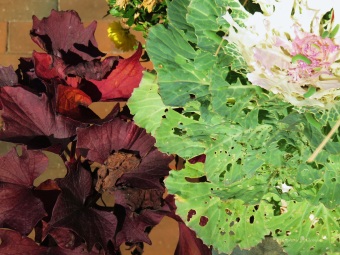 Both my conscious and subconscious have battled against widening the space between me and the husband I loved so much. But, just as in the last months of his life he eased me and our children into the lives which would go on after he died, I am beginning to think he planned to softly retreat after his death.

At first my heart tricked my senses into the mind’s equivalent of muscle memory.

Even after I sold Jim’s truck, the beagles seemed to alert to his expected return from work, but soon they began to settle and press their noses to the window at nightfall instead of wildly wagging and making their way to greet him at the door.  I thought I heard his truck on the dirt driveway, and found myself holding my breath and waiting for him to switch off headlights that I knew would never again illuminate the old brick floored barn in which he had parked while he waited for some song’s last refrain.

It was as if I could still hear the thunk as he switched out into running shoes and his sturdy leather work shoes dropped onto the wide pine floor boards, hosts to persistently buoyant antique nails on which socks snagged; the refrigerator door’s thud, the cupboard door’s lighter clack, and the rattle of ice against glass as he swirled his right pinky clockwise to chill his drink.

Imperceptibly, so much has faded.

Not everything has; mercifully, I no longer descend stairs into the room in which he died over and over again as my mind replayed that day, and no longer do I unavailingly try to sleep in the room where he had suffered.

But his presence has become more gentle, his “footprints like a butterfly’s.” No more thuds from size 13 shoes dropped onto the floor.  Now I see him more as a carefree wanderer, exploring glorious places without me.  He doesn’t need to constantly look out for me anymore.

The hints always were there.

For years his sturdy, animated ghost–whose left hand still bore the same gold wedding band that hung in corporeal form on a chain on my neck–sat to my right everywhere I went.  He was at the table on our wedding anniversaries.  He settled into the passenger seat–the seat I always occupied when he was here with us–as I tearfully drove back and forth to work, to move children into college dorms, and to give away belongings we no longer needed. When a son graduated, I still saw him kneeling beside me, peering into his camera, positioned to catch our son’s face as it would have been had his father been there–more joyful than bittersweet.

Somehow Jim came into softer focus as I saw him by day, though his image and presence was never any less assured in my dreams.

Then, on our wedding anniversary this summer, a nightmare inserted itself into the dream fog of memory.

We were back at the university where we met, between the library and chapel on a sunny spring day.  The stone paths were crowded as students filtered from class to class.  Jim was his healthy student self, in a brown jacket my waking self had not remembered remembering.  As I walked toward him he turned away from me, glanced back at me over his left shoulder, and solemnly said goodbye.  No explanation.  A clean and devastating break.  I understood in that dream instant that he was leaving forever without another word.

There would be no marriage, no children, no life together.  All gone, gone away.

When I awoke I was shaken and shaking.  It took many measures to sort out our beginnings and endings, to filter from my dream its false memory that Jim chose to say goodbye.  In the empty quiet of suddenly interrupted sleep I began to feel he was saying goodbye in a different way–not a break up but a kind of handing off, knowing I would protest and resist had he given me the chance: “You don’t need me here with you all the time any more.”

He never used the word “goodbye” when he last spoke to each of us.  He left, but he didn’t choose to.

Of course, there was a marriage and a life together; there are children; there still is some measure of life for me.

I realized that now he only occasionally occupies the passenger seat and I am no longer afraid of highway driving.  I steadily drive the distances always reserved to him.  I recently drove all the way around a country he never saw. Only once, as I squinted against sun and crested a cliff with a view of vast mountains and even more vast skies, was I outwardly overcome with the agony of missing him–or rather, of his missing this experience.

“I don’t either,” my daughter sensibly said.

“Dad would have loved this trip,” I wept once we had stopped.

“And he’d be glad we’re doing this,” my daughter rightly assured me.

I’ve moved far away from you
And I want to see you here beside me, dear
But things aren’t clear

It’s not all forward progress as I navigate life without the partner who was with me for all my adult life.

I woke up from a dream in Halloween’s early hours, repeating one sentence of relief-laden hope for return, as if about to click the heels of my ruby slippers.

But it was no more a mere mistake than was Jim’s shocking diagnosis.  I’m still here. Another family lives in that house and likely hangs stockings by the chimney, skates on that frozen pond, measures night’s passing hours by the church chimes across the street, opens eyes to sun filtered by lace curtains previous owners left for us and which we left for our successors, and lights fires in the beehive stove.

And if I told it true, all these memories of you, well that’s why I play the game
Friend of mine said a long time comin‘, like it never came….

I still see you there in that silver blue air and I never have moved on
Friend of mine said a long time comin’, I’m just a long time gone 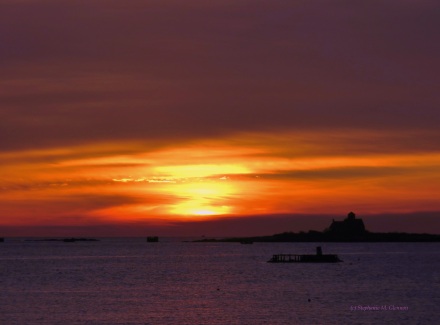 A small bridge once made it easy to reach a tiny island just off the Maine coast in Kittery. Now enormous square frames emerge from the ocean at regular intervals, topping pilings from which the path has been shorn.  The island’s lone structure has long been empty and inaccessible, the spaces within growing larger over time: wooden beams have been weathered down; stone has spilled into the sea; earth has eroded.

You can’t get there from here anymore, as Mainers are often said to say.  Even if you could, there’s no longer any color or life there but for the birds which briefly touch down when the wind calms.  Yet it’s a comforting, seemingly solid presence. There comes a moment when the rising sun seems to swallow it completely before it reappears in daylight.  It supplies scale to a rising full moon.  Just by being in the background it magnifies and brightens each sunrise I see as I remain standing on the shore.

In her spare time, Stephanie works full-time, and then some, as an attorney. She has published articles and delivered talks in arcane fields like forensic evidentiary issues, jury instructions, and expert scientific witness preparation. She also is an adjunct professor at a law school on the banks of the Charles and loves that dirty water, as she will always think of Boston as her home. You are welcome to take a look at her Facebook author page, or follow @SMartinGlennon on Twitter. All content on this blog, unless otherwise attributed, is (c) 2012-2020 by Stephanie M. Glennon and should not be reproduced (in any form other than re-blogging in accordance with Wordpress protocol and the numerous other wee buttons at the bottom of each post) without the express permission of the domain holder.
View all posts by Stephanie →
This entry was posted in Love and Loss and tagged Ed Sheeran's "Sunburn", grief, John Hiatt, memory, missing pieces, Rainer Maria Rilke's Sonnet VI, Vijay Seshadri's "Bright Copper Kettles". Bookmark the permalink.

13 Responses to The Quiet Conjurer