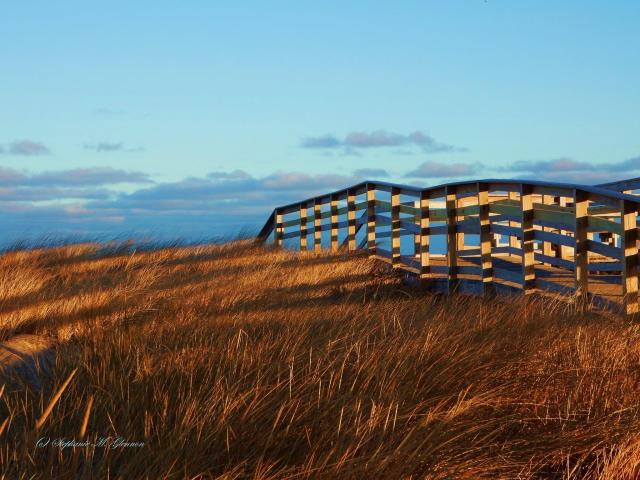 It began with Encyclopedia Brown and Judy Bolton.  An obligatory Agatha Christie phase ensued.  Then it was on to Sam Spade, Adam Dagliesh, Perry Mason, Lew Archer, Philip Marlowe, Sherlock Holmes . . . and a career in criminal law.

I’ve always been a fan of clues.

The season is settled by seagrasses rendered in gold-kissed rust.

A hint of the frigid air temperature may be gleaned from their blades’ unkempt sweep, against stolid pine fence posts–and from the emptiness.  My photographs once were almost exclusively of my growing family; now they are rarely inhabited by people.

The general location can be discerned by anyone with knowledge of the New England coastline.

Is it as easy to read a photograph not as a scene but as a state of mind?  I believe the photographs we take not only mirror our moods but capture layers of memory and contain clues to our subconscious hopes.

The last time I had stood in the spot where this photograph was taken was on a Sunday morning almost two decades ago.  It had been almost as cold that day: we had taken our four small children to Newburyport.  Three were wearing sweaters hand-knit by their grandmother; the baby girl who was then too young to walk–but could wave her wee arms to the beat and mimic from her car seat the lyrics and tones of “I Wanna to be Sedated“–and is now about to exit her teenage years was snapped neck-to-toe in a soft dinosaur print handed down from a brother.

One of her brothers balanced her on his lap as my husband, no doubt with a camera in his backpack, trundled the family off to the same boardwalk path where I now stood alone.

One of those children is about to celebrate her birthday far away from me at a university where she studies computer engineering–and still sings and dances.  Another daughter is across the world on a research grant. My sons have degrees in math, physics, and mechanical engineering.  The nest truly has emptied.

My husband died almost five years ago. He stopped taking pictures only weeks before that.

Colorful skies beckon and the boardwalk leads me alone to an uncertain place, bathed in gold.

In her spare time, Stephanie works full-time, and then some, as an attorney. She has published articles and delivered talks in arcane fields like forensic evidentiary issues, jury instructions, and expert scientific witness preparation. She also is an adjunct professor at a law school on the banks of the Charles and loves that dirty water, as she will always think of Boston as her home. You are welcome to take a look at her Facebook author page, or follow @SMartinGlennon on Twitter. All content on this blog, unless otherwise attributed, is (c) 2012-2020 by Stephanie M. Glennon and should not be reproduced (in any form other than re-blogging in accordance with Wordpress protocol and the numerous other wee buttons at the bottom of each post) without the express permission of the domain holder.
View all posts by Stephanie →
This entry was posted in Love and Loss and tagged Agatha Christie, clues, detectives, Encyclopedia Brown, Janet Evanovich's Stephanie Plum, Judy Bolton, photography, Plum Island, state of mind, The Ramones' "I Wanna be Sedated". Bookmark the permalink.

6 Responses to Seacoast State of Mind