The penultimate question’s answer would prove inaccurate, the last a bit of sales puffery.

And he was a beauty: heavy on the caramel, tinged with russet-gold.  Enveloping glossy amber eyes.  When he curled up to sleep just so, dappled black on the purest white created an M. C. Escher image of  a platypus.

Brady was snipped before we were permitted to bring him home to his humans and his big brother, whom we had adopted a year-and-a-half earlier (“from a K-I-L-L shelter in Indiana,” we explain if asked.  To this day we whisper and spell out the word, even when the beagles are slumbering).

After his operation, with its attendant impingement upon his capacity to, well, tomcat around….we decided to cast off the “Tom” as well.

Brady of Nottingham, a gentle prince among beagles. 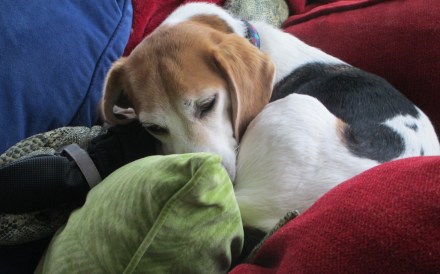 Brady’s needs were relatively simple but his phobias already were entrenched.  He had been on his own in the woods, perhaps a hunter’s puppy who either had run away or been discarded because anyone could see he was incapable of doing harm to a fellow creature.

He was highly motivated by food, or any substance bearing the most tangential resemblance to food.

His IQ, which our children carefully measured, was sub-optimal.

Nonetheless, he was at least an accessory to, and quite possibly a principal in, the Great Sausage Calzone Disappearance of 2011.

His emotional intelligence was off the charts.  He howled with heartbreak when his master’s soul slipped from our home.  Then he came to me and quietly nuzzled me as I sat, stunned and broken, on the floor.  I would swear there were tears in his eyes as he bowed his cloud-soft head into my lap.

He was a lover, not a fighter.  My daughter said it best: she would never name a favorite among her beloved beagles, but “Brady was by far the sweetest, never started fights, never deliberately disobeyed or tried to get away with things (ahem scooter). He was always the pushover of the group, always giving up his beds and treats if one of the others tried. He may not have had the best listening or learning skills or bladder control but he still always tried his best.”

Over the course of nine years his fear of men in pick up trucks abated.

He remained pathologically afraid of thunder and of fireworks.  We would have to bundle him in blankets and hold him as he shook, his white-tipped tail locked between his legs.

He loved to lick the floor, an odd habit that dovetailed nicely with my disinterest in cleaning.

He developed a curious tendency to show up at one’s feet and park himself quietly there for as long as the feet were willing to stay in place.  He was a most excellent foot warmer.

And in the last six weeks he seemed the most content he ever had been.  He adored basking in his new garden, smelling each late spring and early summer bud, letting the bright pink bleeding hearts tickle his glorious ears, wandering among successive blooms: magenta peonies, four shades of roses, brilliant orange plate-sized tiger lilies.  The light pink roses were his favorite.  He spent hours stopping to smell the roses.

He loved to ride in the car, blissfully sniffing the great outdoors, his ears flapping in the wind.  Even when we were on our way to the vet.

He had a regular breakfast and walk.  As I tended to some work, one of my sons noticed Brady seemed to be having difficulty breathing and suggested I call the vet.  The office would be closed until after the July 4 holiday, so I called the veterinary hospital that had performed emergency surgery on puppy Scooter.  They said to bring him in to be checked.

With the luxury of being alone with me, Brady was perky enough to pull me for a short walk before getting into the car.  Then, instead of jumping on the seat to poke out his nose and take in the scents, he settled silently into a space on the floor, a darkened cave formed among my bankers’ boxes of transcripts.

It seems such a blur of events.  Oxygen.  “Has he had heart trouble?”  IV fluids.  “We may be able to bring down some of the edema.”  X-rays.  “Could we get a room?” the veterinarian says, nodding meaningfully to the receptionist when she comes out to talk to me.  “He’s not responding as well as we had hoped.”  Images.  More waiting, now on high alert.  “Congestive heart failure.”  His heart was too big: it pressed up into his trachea, making it nearly impossible for him to breathe.  Me, looking at another abdominal x-ray through the lens of scarred experience: “His lungs shouldn’t look like that.  Are those white shadows something else?”

And finally, “Can you make him not suffer?”

My friend arrives and we are led to the Comfort Room.

Brady comes and instantly relaxes as I hug him to me and stroke his head.

Everyone should be blessed with the kind of friend who will go into such a room and stay with you there, supplying a steady stream of tissues and holding your shoulder as you cradle your velvet boy and tell him you love him, how lucky you are to have had him come home with you, he’s the best of beagles, he’s going to see master again, and now at last he can run off leash.

When I told her we had to let him go, one of my heartbroken children said it was right not to have him continue to suffer, and now, from the distance of heaven,  at least he would not have to be afraid of the fireworks. 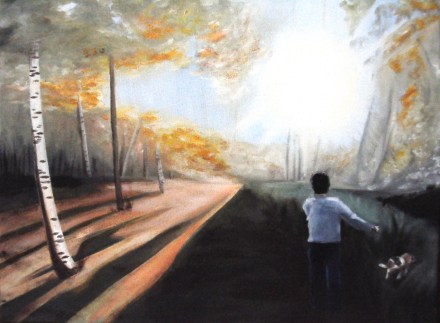 In her spare time, Stephanie works full-time, and then some, as an attorney. She has published articles and delivered talks in arcane fields like forensic evidentiary issues, jury instructions, and expert scientific witness preparation. She also is an adjunct professor at a law school on the banks of the Charles and loves that dirty water, as she will always think of Boston as her home. You are welcome to take a look at her Facebook author page, or follow @SMartinGlennon on Twitter. All content on this blog, unless otherwise attributed, is (c) 2012-2020 by Stephanie M. Glennon and should not be reproduced (in any form other than re-blogging in accordance with Wordpress protocol and the numerous other wee buttons at the bottom of each post) without the express permission of the domain holder.
View all posts by Stephanie →
This entry was posted in Love and Loss and tagged beagles, Brady, forever homes, letting go, love, M.C. Escher, SPCA. Bookmark the permalink.