“She saw the light again. With some irony in her interrogation, for when one woke at all, one’s relations changed, she looked at the steady light, the pitiless, the remorseless, which was so much her, yet so little her, which had her at its beck and call . . . . [S]he thought, watching it with fascination, hypnotised, as if it were stroking with its silver fingers some sealed vessel in her brain whose bursting would flood her with delight, she had known happiness, and it silvered the rough waves a little more brightly, as daylight faded, and the blue went out of the sea and it rolled in waves of pure lemon which curved and swelled and broke upon the beach . . . .”

That steady light, “true and tried, so well and long,”  is notable perhaps above all for its assurance of coming around again.  It was the beacon emitted from the eponymous, inanimate lead character of  Virginia Woolf’s To the Lighthouse.

A lighthouse delivers the precise visible counterpoint to Woolf’s lightly-sleeping heroine’s understanding of the slice of hidden darkness which form’s a sentient being’s reductive essence: alone and awake, “All the being and the doing, expansive, glittering, vocal, evaporated; and one shrunk, with a sense of solemnity, to being oneself, a wedge-shaped core of darkness, something invisible to others… and this self having shed its attachments was free for the strangest adventures.”

Unlike with us humans, its core is the light.  And the darkness carries no negative weight. 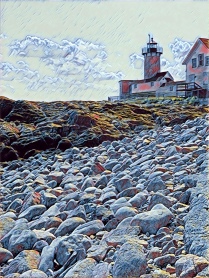 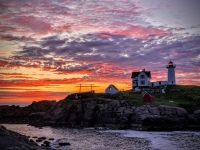 To the extent obsession is problematic, I have developed a bit of a lighthouse issue during the past decade.

A fluency in Fresnel lenses, colored and clear, glittering with rainbow arcs when the sun skirts their layered crystal rings.

An appreciation of the unique counted measure of each lighthouse’s cycling strobe, a perpetual beat with no melody.

I am a fan of clouded, stormy skies, and not nearly as interested in the blinding lemon of the sun as it nullifies the night in which lighthouse sentries gently guide the sleepless with serene swoops of teal, white, and red.

Thanks to my insomnia, I get to my lighthouses well before sunrise, especially when the sun rises earliest–making way for its most nuanced and lingering transitions to the noise of the day–and I sense harbingers on the horizon.

The darkness doesn’t seem so dark.  The light is cast in increments so reliable that their past and future paths coalesce; their instantly-registering and cycling memory creates a trop l’oiel of soft daylight.  When standing by lighthouses in inky black and the deepest blue it is as if I can see the whole of the earth and sea, bathed in moon gold: jagged limestone cliffs, working harbors, New England ports where pleasure craft are moored.

The light is noiseless, and even at their fiercest measure the waves wash in without  capacity to startle.

By which they rest, and ocean sounds,
And, star and system rolling past,
A soul shall draw from out the vast
And strike his being into bounds . . . .

With these quiet guardians there is nothing to fear in the not-quite-night of solitude .

In her spare time, Stephanie works full-time, and then some, as an attorney. She has published articles and delivered talks in arcane fields like forensic evidentiary issues, jury instructions, and expert scientific witness preparation. She also is an adjunct professor at a law school on the banks of the Charles and loves that dirty water, as she will always think of Boston as her home. You are welcome to take a look at her Facebook author page, or follow @SMartinGlennon on Twitter. All content on this blog, unless otherwise attributed, is (c) 2012-2020 by Stephanie M. Glennon and should not be reproduced (in any form other than re-blogging in accordance with Wordpress protocol and the numerous other wee buttons at the bottom of each post) without the express permission of the domain holder.
View all posts by Stephanie →
This entry was posted in Love and Loss and tagged "To the Lighthouse", In Memorium A.H.H., lighthouses, Lord Tennyson, Virginia Woolf. Bookmark the permalink.

7 Responses to To the Lighthouses