In the Commonwealth of Massachusetts, a person can be indicted as an habitual criminal.  It is as if plucking a magic combination from three enumerated categories of convictions means one has developed an ingrained immoral memory and no longer can help but to engage in criminality.  Talk about a bad habit.

Another intriguing piece of legislative art elevates crime from a mere “habit” to a career–although one would think the glass ceiling to professional advancement has been fairly well solidified by the time one is held to answer to a charge of being an Armed Career Criminal and faces a mandatory minimum prison term of as much as fifteen years.

Lines variously attributed to wildly different sources had a recent incarnation in a movie about Margaret Thatcher:

Perhaps.  As a logical matter I’m not entirely persuaded.

The point is that as annoying as one or more of my children may find some of my habits… they really aren’t all that bad, are they?

A friend once told me I have the “least addictive personality” of anyone he knows.  I have no addictions, although I do have a “Breaking Bad” habit so compelling that I stockpiled blue rock candy, chamomile tea and a certain brand of sweetener (interesting product placement) for a recent finale.   I am suffering moderate withdrawal symptoms following the show’s conclusion.

I have a longstanding fabric habit that calls upon me to stockpile every pattern, color and shade I might be able to use to transform things found in nature into cotton.

I habitually make and promptly lose lists of things I need to do.

My maternal heart and muscle memory causes me to lose myself in time and sway gently, as if holding a newborn baby in my arms, when I cradle something of similar heft–a box to be mailed at the end of a long line, bolts of fabric to be cut, or groceries in a check-out line.

I speak to people who are not alive, yet have “their five senses intact, their footprints like a butterfly’s.“

And I have a habit, every day, of peering into the sky and water, looking for life and color and light; of swerving off my path to explore a photographic opportunity outdoors; of calling back to my senses parts of life which were beautiful, and hoping that the future will hold such moments as well. 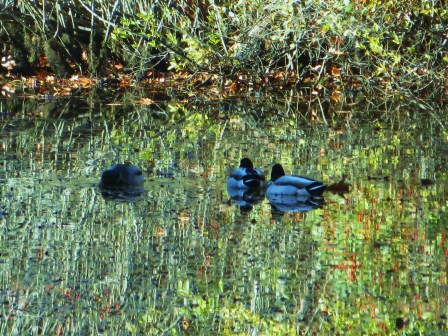