On the west side of Peter Faneuil’s pre-Revolutionary War era marketplace is an 1880 statue of Samuel Adams.  I caught Mr. Adams sternly surveying the blocky cantilevered 1968 concrete behemoth also known as City Hall (often referred to, without irony, as being in the “brutalist” architectural style).  Jim and I got our marriage license there. . . .and of course named our first son Samuel.

Mr. Adams is rendered in bronze, atop famous Quincy granite from Norfolk County: County of Presidents.

Even from the back, Adams’ prosecutorial stance, arms crossed and folded, is hard to miss. It has been said that sculptor Anne Whitney intended to capture Adams impatiently awaiting Governor Hutchinson’s response to a demand immediately to remove British troops following the Boston Massacre.

It seems to me that patriot and brewer Sam Adams does not approve of the late 20th Century architecture that now permanently occupies his burnished gaze.

One of many things I love about the City of Boston is its unending juxtapositions–of past and present, gun-metal gray 18th Century gravestones and blazing primary colors. Newbury Street couture and Red Sox caps.  Narrow paths wending through unspeakably pricey Beacon Hill, through which cows no longer wander.  The unerring pleasantness of the Four Seasons and the notoriously surly Durgin Park waitresses.  “No Name” fried clams and plump Parker House rolls. 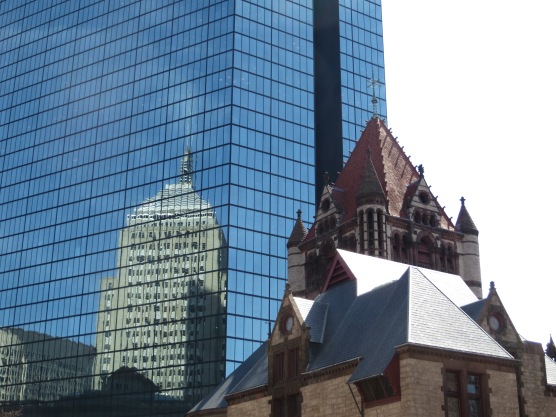 People who killed and maimed innocents and the magnitudes more who rushed to try to help, who saved lives, who gave comfort.

One City.  One strong place.