This week’s writing challenge asked us for a Valentine’s Day story.  Once again I shall travel back in time to a not-so-distant day when our family was whole but knew it was soon to be missing its core. . . . 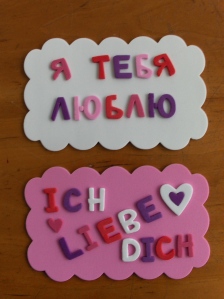 Just before Valentine’s Day we were visited by two young nieces.  Jim rested up so he could spend time with them.  He gamely assisted with Valentine’s Day crafts, posing with a pair of blue eyeglasses one niece had adorned with sparkling beads and feathers.

He died the following month.

I had to stop at a drug store in which all the pharmacists know and likely pity me by sight.

To look at the cheerful carnation pink and red of Valentine’s Day displays is almost as sobering as it was to walk into a stationery store in June and come face-to-face with the Father’s Day cards.

I wheeled around and hastened back out the door as if the cards might swoop down and attack like Alfred Hitchcock fowl–a murder of crows, an unkindness of ravens, a sedge of bitterns.  (I am quite the fan of “terms of venery.”)

I do realize this “woe-is-me” me is not my most attractive self, but there you have it.

On the last Valentine’s Day he spent on earth, Jim handed me a box wrapped in shiny Boston Celtics green.  It matched the boxes I had seen and which I knew contained necklaces he carefully had chosen as birthday gifts for our two winter-born daughters.

First, I had presented him with humble and transient treasures: a heart-shaped cookie and some soap he had requested.  He gave me a diamond necklace.  We gave each other cards in which we had both included variations on the phrase that we did not know where to begin.

He had printed out a picture of the two of us on our last family vacation.  Because he chose it, it will forever be my favorite of us.  It remains propped up against the reading lamp next to where I try to sleep, and usually instead take in a great deal of good literature (and some so-so books).

He had adorned it with foam letters from the box of random craft supplies we had used with his nieces a few days earlier, noting that neither crafts nor Valentine’s Day was really his thing, but the circumstances were special.

Jim was frugal only with money.  Perhaps that was an artifact of his family’s reaction to the swift dissipation of the first substantial sum he, the oldest of five children, ever possessed—the amount with which he had been entrusted for both necessities and incidentals during his first year in college.  He was neither a traditionally demonstrative nor a lavishly-spending person.

Since his freshman year, when he blew two entire semesters’ allotted fortune ($500 in 1977 money) on a stereo system (kids: ask your parents), Jim had not spent large sums of money on himself or others–except on the exceedingly rare occasions when he would buy a house, which he excused as more of an investment (even though our timing, market-wise, was notoriously bad).  Our growing family did, after all, require a place to put all of those books, and all of my fabric.

It was a rarity when my husband would spend enough money that it was worth mentioning to me . . . although there was the time I was startled that a man showed up on the doorstep of our new home, asking me for a check because he had “my tractor.”  Jim forgot to mention the purchase.  He had always wanted to be a gentleman farmer in his spare time.

We spent my very first Mother’s Day, with our eight-month-old son, at the Jersey Shore (which then carried somewhat classier connotations in popular culture, due to no fault of the area itself; it was lovely) with friends from Jim’s residency.

All of us went to a diner for breakfast, heavily encumbered by our baby and our friends’  toddlers.  Swirling around us like the cloud of dirt around Pigpen in the Charlie Brown comic strip was a circle of enthusiastic juice-box wielding children (at least one of them sneezing wildly, having planted a direct hit on her birthday cake the evening before), folding strollers, clacking colorful plastic teething toys, diaper bags and assorted baby paraphernalia.

We sat at a long table and the children all experimented, in a Jackson Pollock sort of way, with scattered Cheerios and bits of buttered pancake and streaks of sticky condiments on paper mats.

Other families with less detritus and better-dressed moms (or, at least, moms not adorned with viscous, vivid strained food splotches) shrunk away from our table.

Later that day Jim gave me a lovely silver filigree bracelet with a pale blue gemstone and earnestly told me that the gift was because it was my first Mother’s Day.  I duly mentally noted that I should not expect similarly over-the-top treatment every May.

Years later–five weeks and forever before the surgeon said “This is your tumor,” but within the time when I later realized Jim was first feeling his peculiar upper quadrant pain—Jim again gave me unusually lavish Mother’s Day gifts.  They were not on the order of a diamond necklace, but still gave me pause.

It was so unlike Jim that I wondered, but did not ask him, if there was something special about that Mother’s Day.

I wonder now if he somehow knew–before he knew–that it would be the last with me, with us.  Did his condition register at some level?  Had he, like an Andre Dubus character, “simply known, as a person with a disease may know without giving it a name or even notice, long before its actual symptoms and detection”?

Many friends of ours began their lives as parents much later than Jim and I did.  They all have had fewer children, and most an only child.  More than one of them has told me of making a decision not to have more, given their ages when commencing the adventure of parenthood: “I’d be in my sixties by the time she graduated high school.”

It does not seem to occur to anyone, even when parenthood begins later in life, that he or she will not be around for high school graduation.

It did not occur to us until Jim’s diagnosis that either of us would not be around when one of our children graduated from high school, or that one of us would not be there for the first college graduation, let alone the next birthday or Mother’s Day.

By Valentine’s Day, of course, we all knew.

When I saw the necklace and read his card, I swallowed but couldn’t speak.

Jim said, “It’s also for your birthday of significance,” as if to excuse his lapse in frugality.

I could feel my eyes fill.  Because he knew he would not be here when I actually had my next birthday of significance, or for any other birthdays, and wanted to give me something for all of them.