I am besotted by waves.

After a winter that wasn’t after all without end, a first wave of flowers came in crocus form: dazzling white, lavender, and bright yellow.  Almost as quickly as they sprouted they were gone, replaced by a blitz of daffodils, followed by swaths of lipstick sunset tulips.

Suddenly it is August, and every few days it seems a new platoon of flora cycles through. Delightfully descriptive “curly fries” Hosta plants wave in a light wind.  Today is a riot of pastel hydrangea and sturdy day lilies, their gracefully ruffled petals edged in a sea-foam of sunlight and shadow. 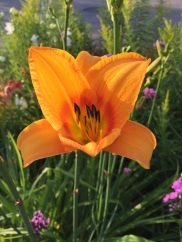 I don’t know what it is about waves.

A wave tickled my heel as I faltered in reading a poem about a turtle to my children a year after their father died.  The next year, just after a seashell of his ashes wafted into the ocean in Dublin, a gentle wave deposited at my bare toes a patch of seaweed in his trademark green, framed around a distinct heart-shaped space.

Perhaps inspiration comes from waves’ movement and light and soothing rhythm, like a heartbeat or a summer bird’s song.

“This mounting wave will roll us shoreward soon.”  Wrote Alfred, Lord Tennyson.  His seafarers yearned for waves to bring them home again.

Maybe it is not only the waves themselves which call me, but the hope of what they might one day return.

5 thoughts on “Waves of Inspiration”