New England daffodils do not do well in storms.

Rain seeps in and they seem to give up, becoming one with the the weight of it. Pale  yellows dissolve into cadaverous shades of early frostbite.  Tea-tinged white turns translucent and becomes one with whatever lies beneath.

Tulips, which follow the daffodils in quick succession, seem to be the youngest child among their flowery brethren.  Rather than quietly making room for the next incoming flora, they become spectacularly, raucously undone by rain.  They send out distress signals, flares of bright twisted petals, and co-opt their more reticent neighbors as Victorian fainting couches when the clouds can no longer contain themselves.

Talk about raging against the dying of the light.

Some tulips remain aloft even after losing themselves by half, a sprinkle of stamen facing the world, chaotic innards utterly exposed, an architectural model of a flower.  Some suffer from accelerated aging, and within a week of blooming their soft new petals mottle and turn to crepe. Where daffodils melt like tissue paper into incipient hosta beds, tulip petals gulp liquid until they contract into gnarled clumps. 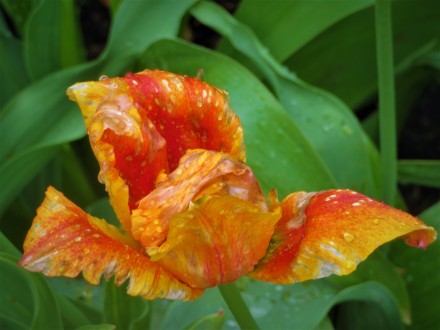 A few watchtower irises have just arrived but already encountered sustained seasonal storms. Their stalks have not bowed. Their falls are unencumbered, fluttering freely. They contain storms’ residue into discrete pearls which gather on saffron signals atop their purple petals. Through different angles they glitter and refract the riot around them when the sun comes out again.

It is no mystery which one reminds me of my husband, whose Mother’s Day gift to me this year is the seasons’ subtle rhythms.

I clearly was the daffodil for quite some time, but I think I’m making some progress through the tulip stage, perhaps someday to be in companionable peace among my fellow post-storm wanderers. 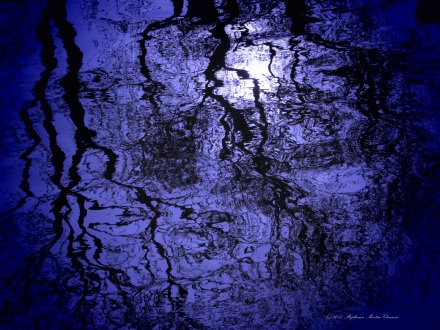 In her spare time, Stephanie works full-time, and then some, as an attorney. She has published articles and delivered talks in arcane fields like forensic evidentiary issues, jury instructions, and expert scientific witness preparation. She also is an adjunct professor at a law school on the banks of the Charles and loves that dirty water, as she will always think of Boston as her home. You are welcome to take a look at her Facebook author page, or follow @SMartinGlennon on Twitter. All content on this blog, unless otherwise attributed, is (c) 2012-2020 by Stephanie M. Glennon and should not be reproduced (in any form other than re-blogging in accordance with Wordpress protocol and the numerous other wee buttons at the bottom of each post) without the express permission of the domain holder.
View all posts by Stephanie →
This entry was posted in Love and Loss and tagged "Do not go gentle into that good night", daffodils, Dylan Thomas, irises, Liquid, Mother's Day musings, postaday, spring flora, tagaday, tulips, Weekly Photo Challenge: liquid. Bookmark the permalink.