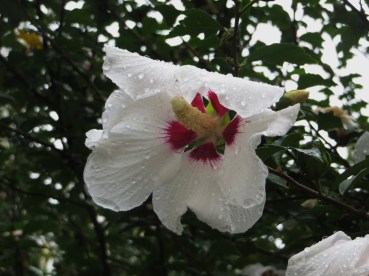 Last night I dreamed that our family–including Jim and the four children who suddenly are all away at schools in four states–was at some kind of combination kids’ store and restaurant.

In my dream, I left to get the car because it was snowing and I didn’t want Jim and the kids to have to battle through the storm.  My feet were bare, however, and first I struggled to find the car.  Then I had to extricate it from a densely packed lot and re-park it without careening into another car.  As I did so I thought that at any second I’d hear the screech of metal-on-metal and there would be no warning sound: any skidding would be muffled within the white vortex.  I’d be alone inside the car as glass shattered and steel bent. No one would hear me scream.

Somehow, the crash did not come.

Finally, at the end of the dream and the beginning of my waking, I went back into the building where Jim sat at a table with the children seated next to him.  I looked at him and knew that something was very wrong.

Oh, I thought, waking up.  The rain outside had turned into a trickle of tears down my cheek, a trick of mind into matter relegated to dreams.

“Oh,” I said, out loud, though there was no one to hear me.  “Is today the twenty-second?”

My line of work makes me aware of the magnitude of other people’s suffering. I am aware, in a less immediate way, of abundant horrors in the wider world.

But it’s still not easy to face the micro sometimes.

Our wonderful friend Elizabeth and multiple members of my immediate family have experienced medical crises this month.  It’s been such a constant accumulation that I could not even think of trying to get to one of my daughters, who was rushed to a hospital six hours away for an emergency appendectomy.

(I had received an “I don’t want to alarm you, but.. . .” text from her, even though this is the same daughter who has urged me never to start a sentence with, “I don’t want to freak you out, but…”  Sometimes there’s just nothing else you can say.).

Now I have to try to triage calamities without Jim’s calming guidance, medical knowledge, or temperament.

Three days’ absence used to be enough to hurl our household into chaos.

A quarter of a decade.

Wake me up when September ends.

That last sentence–a title and line from a Green Day song–originally was going to be the last one in this post.

John Irving famously starts his novels with their final sentences.  I will never be a real writer, but I thought at least I had my last sentence.

Sometimes the way one starts and proceeds with a story has little to do with how it ends.  I held off publishing this post while I went out into a light rain in search of pictures to accompany my melancholy string of thoughts.

I found a little something else out on the streets, where there are so many opportunities to not be alone. . . .

I began in search of coffee.  The good stuff.  Specifically, Breaking New Grounds: latte, accompanied by ogling the cheesecake gallery.  But I digress.

To get there, I took a circuitous path and ended up staring straight at a somewhat unusual sight: the gruff exterior of a crossing guard, with at least a day’s beard growth, a reflective vest, loafers. . . .and a billowing bright orange tutu, a pink crysanthamum-bedecked straw hat, and an oversized wand.

Place your bets on whether I’ve gone off my meds or otherwise dissipated my marbles, then feast your eyes on this:

Soon I saw a smattering of wee children dressed as fairies, most accompanied by parents. They were admiring fairy houses which had been scattered among the early fall flowers in Portsmouth’s Prescott Park.

As I wandered along I noticed some new shops near the park.  Yours truly is nothing if not a compulsive seeker of perfect niece and nephew gifts–not to mention gifts for fairy godchildren and others–so I went in and did some shopping.

At the first store, the clerk was engaged in a discussion with a couple clearly from out of town, who did not even appear to notice the clerk’s greenish hue, dusted with gold sparkles, and feathered sprite’s hat.

It was a little bit like wandering into A Midsummer Night’s Dream.

“Can’t I get something off?  It’s my birthday.” The woman persisted for several rounds in trying to negotiate the price.  This simply isn’t done here.

“You’re from New York, aren’t you?”  I asked. (No offense to New Yorkers; you really had to be there.)

“The accent,” I nodded, falsely.  She had no discernible one.

I made my gift purchases at that store, then went to another, where two cashiers were adorned with flora and sparkling jeweled wings.

I loaded the single original paper bag with both stores’ bounty, much of it delicate and breakable.

Then I walked some more and purchased the elusive coffee.

And then it was time to go home and work on a motion for work and correct some law students’ papers.

I began to cross a downtown street when I heard a ripping sound, looked down, and registered that all my gifts were about to tumble out of my over-laden white paper bag onto the bricks and concrete.

I had not finished the fairly quick work of uttering, “Oh, crap” when a man caught the bag from underneath and rescued its contents.

He managed to fold over the intact portions of the bag so I could hold it safely with both hands now that the handles were useless.  As I rounded the corner on the next block, he came back to me and gave me a new bag which he must have procured by running into one of the nearby stores.  He helped put the shredded old bag into the new and sturdier one before continuing on his way.

Another message for me, Jim?

Just a few days ago, at a massive family medical convocation, a doctor explained to us that delirium tends to be worst for patients at night, when they lose the bearings and rhythms of a daytime routine.

Perhaps the deterioration of one’s thought processes also is function of being alone, apart from those you love.

Now that my nest truly is empty, if I speak no human hears me.  If I weep the beagles will pad over to me, but I’m not certain that even Rufus’s map of the world permits him to understand everything I tell him.

But by day I have a choice.  I can hole up alone or go outside among the living.  Yes, it makes me wistful to see fathers out there with daughters dressed like fairies, but at least our family had that once, and for many years.  We had our Sundays in the park together.  Not everyone does.

And what better way to light up this first fall Sunday morning than a series of people dressed like fairies and sprites, and a kind stranger who saves the day so I can pass along my gifts and reminds me that life is good? 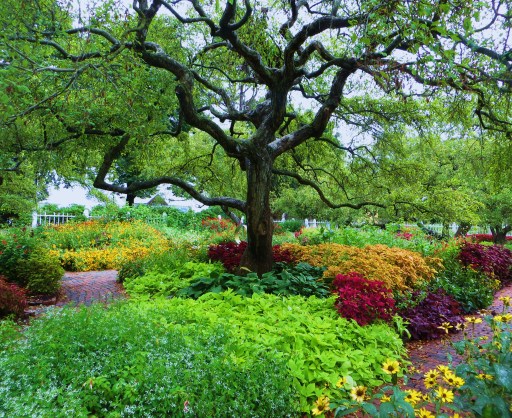 17 thoughts on “When September Ends”